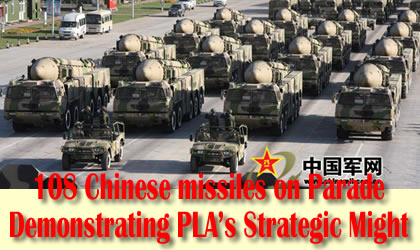 New missiles were demonstrated today at a military parade, part of the celebrations of the 60th anniversary of the founding of the People’s Republic of China. Among the missiles demonstrated at the parade were several intercontinental ballistic missiles (ICBM), such as the road-mobile Dong Feng 31 (DF-31A) modified to carry three multiple independently targetable re-entry vehicles (MIRV). The Chinese are also working on a larger ICBM – known as DF-41 carrying 10 MIRVs over a distance of 11,000-13,000.

Another new missile on display for the first time is the Dong Hai 10 (DH-10), a long-range land-attack cruise missile (LACM) capable of attacking targets at a range exceeding 1,500 km. DH-10 is launched from a land-mobile platform deploying three missiles. The missile is believed to be a reversed engineered Russian Kh-55 Raduga cruise missile; six such missiles were procured by from Ukraine by China in the 1990s. China is believed to have produced more than 200 DH-10 cruise missiles.

Other missiles on parade include upgraded versions of the DF-15, provided with stabilizer fins attached below the warhead section hinting to possible modifications of the warhead itself (such as augmenting penetration capability); the medium range DF-21C medium range missile was also on display, with a new engine, the missile is setting the basis for China’s future naval based anti-ship ballistic missiles, which could target U.S. carrier forces in the future.

DongFeng 21C (CSS-5 Mod-3) medium-range ballistic missile (MRBM) is the conventional armed version of the CSS-5 missile, first deployed around 2005. Operated by the Second Artillery Corps, this solid rocket propelled missile is enclosed in a container-launcher carried on a transporter-erector-launcher (TEL) 10×10 wheeled vehicle. It has a range of 1,700 km and payload capacity of two tons. The missile can be loaded with a unitary or multiple conventional warheads.DongFeng 31A, (CSS-9 Mod2) – a modernized version of China’s primary strategic missile, the missile is contained in a large cylindrical transporter-erector-launcher (TEL). The missile has a range exceeding 11,000 km. This road transportable missile can deploy to predetermined launch sites throughout the country – by mobilizing these strategic missiles, China believes the missiles have a chance to survive avoid a first strike. The missile uses solid propellant, enabling longer life span and shorter reaction time, compared to the liquid fuel ICBMs.

The DongFeng 15B (M-9; NATO codename: CSS-6) is an improved, solid-fuel, short-range ballistic missile (SRBM) system currently in service with the Chinese Army.

DongFeng 11A (CSS-7) is a road-mobile, single-stage, short-range ballistic missile (SRBM) system developed by CASIC Sanjiang Space Group. The missile is transported on an eight wheeled transporter-erector-launcher (TEL). Developed in the 1980s, the improved variant DongFeng 11A on display at the 2009 parade was fielded with the Chinese army in 1999. This version employs a conventional warhead and has extended range, bridging the gap between artillery rocket system (at ranges up to 100km) and a strategic surface-to-surface missile (beyond 500km).