Originally the Israel Navy turned to the Italian shipbuilder Fincantieri and Thyssen Krupp Marine Systems (TKMS) in Germany for proposals. Construction or the assembly of the vessels by Israel Shipyards in Haifa has also been considered. The possible subcontracting of work to U.S. manufacturers, by benefiting from Foreign Military Sales funding has also been evaluated.

Israel is said to be interested in a ‘stretched’ version of the MEKO A-100 corvette, a ship with a displacement of 2,200 tonnes. However, for such a vessel to become superior to the current Eilat class, the Israelis should opt for the latest, advanced stealth version of the MEKO CSL, which has already been designed for such specifications. The CSL will better adapt for the Israeli requirements for versatility, deck space and sensor placements.

A major obstacle for the potential deal is the recent acquisition of Blohm + Voss Shipyards – the shipbuilder of the MEKO Class vessels – by the Abu Dhabi MAR Group of the United Arab Emirates. In October 2009 MAR and TKMS announced the agreement to establish a joint venture ‘Blohm + Voss Naval’, for the design and manufacturing of naval surface ships – frigates, corvettes and offshore patrol vessels. Israel could find such move difficult to digest, accepting ‘Blohm + Voss Naval’ as a strategic supplier. Considering  this obstacle, and well aware of the potential opportunities, TKMS and Israel should have worked out a solution to satisfy both the Germans and Israelis. A previous attempt to merge procurement of German vessels with Israel Navy acquisitions or the transfer of existing German Navy vessels to Israel have not materialize.

While the CSL model is still in a blueprint phase, MEKO A class corvettes are already operational with several navies worldwide. The joint operation comprising the TKMS Blohm + Voss Nordseewerke group, with Kockums in Sweden and Hellenic Shipyards in Greece has delivered more than 160 naval surface vessels since 1980. More recently South Africa has received four Valour class (MEKO A-200) large corvettes, Malaysia has ordered six Kedah class (MEKO A-100) corvettes and Germany received two of the fiveBraunschweig class 5 K130 corvettes on order. In addition, Poland plans to acquire up to five MEKO A-100 Gawron class corvettes.

MEKO has not been an obvious choice for the Israelis. The German Mehrzweck-Kombination (MEKO – short for ‘multi-purpose combination’) is 91 meter long vessel – only four meters longer than the existing Saar V class corvettes which are in service with the Israel Navy since the 1990s. The most attractive features of the German design being 25% larger volume (displacement of 1,650 tons) enabling the MEKO A-100 design potential endurance of extended missions at longer range, exceeding 6,000 nautical miles – 50% beyond the range of Saar V. Both vessels have a mission endurance of three weeks at sea. 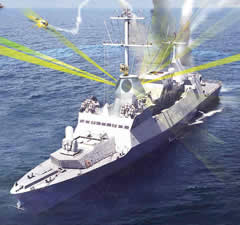 Israel is expected to be using the Barak-8 extended air defense missile systems on the new built corvettes. Having larger deck surface and a conformal mast means the new vessel could be equipped with more missiles than the current Saar V and, more important – its superstructure is well designed to mount the larger quad-face MF-STAR radar, while the Saar V will have to suffice with a radar employing a rotating antenna. The four-plane MF-STAR phased array radar will be able to support simultaneous operation of surface search, multiple anti-aircraft, anti-missile and surface attack weapons. The new vessel will also be equipped with various surface attack missiles, anti-submarine weapons and carry a helicopter on board. Given the Israel Navy’s enthusiasm and support of unmanned systems, it could also become a supporting platform for a various unmanned systems, including the Naval Rotary UAV (NRUAV) and Unmanned Surface Vessel (USV) and Underwater Unmanned Vehicle (UUV), requiring adequate deck space and launching facilities for USV and UUV.

A major advantage of the latest MEKO design is its stealth capability. By employing technologies developed for modern German warships and the Swedish Visby class stealth corvettes, the MEKO designers achieved a reduction of about 75% on the ship’s infrared signature which has been achieved by elimination of the funnel, and instead hot exhaust gases are ducted through a horizontal system. The signature-reducing smooth hull plating and concealed deck equipment are the most obvious features of the futuristic stealth concept underlying the Visby class – which is a true “stealth ship”. These features are achieved by a water-jet propulsion system with a reduced stern wave, an underwater exhaust outlet, the use of non-magnetic GRP and the most advanced sensor technology. Seawater is injected into the exhaust duct to cool the exhaust fumes, before being expelled just above the waterline. Research on the Visbyconcept was started by the Swedish ship designer Kockums in the 1990s, now being part of the TKMS group. The MEKO CSL Corvette blends design features of the successful MEKO and VISBY Classes into a modular vessel that can be rapidly configured for different mission requirements, in terms of functionality and combat capability.