Ft Lauderdale, Feb 24, 2010: Oshkosh Defense has unveiled today two new variants of the M-ATV – an ambulance and a utility vehicle. The vehicles are on display at the AUSA Winter exposition in Ft. Lauderdale. The utility and ambulance M-ATVs were developed to allow military operations to provide critical casualty care and resupply services in unforgiving landscapes where tactical missions must operate. The M-ATV has provided superior off-road mobility for harsh mountainous terrain and unimproved road networks in places like Afghanistan.

The company will deliver 625 add-on armor kits worth $84 million, to defend the M-ATVs against explosively formed penetrators (EFP). These kits are derivatives of armor modules battle tested on MRAP and MTVRs in Iraq. The other contract, worth $24 million provides for assemblies of electronic equipment and modifications of the electrical to support ‘silent watch’, allowing the vehicles to operate the radios, computers and jammers for extended periods of time with reduced noise and heat signatures from the vehicle. 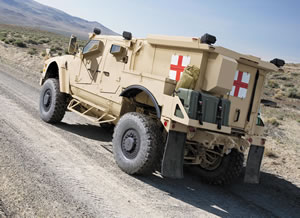 Oshkosh Corporation also announced it will deliver additional 1,460 M-ATV vehicles under a new $640 million contract awarded by the U.S. Army. With this recent award the company’s order book for M-ATV is valued at more than $4.74 billion for 8,079 M-ATVs, add-on armor and spare parts kits and aftermarket in-theater support.

In addition, Oshkosh unveils the medium truck produced under contract for the U.S. Army. The Army awarded Oshkosh with the FTMV competitive rebuy contract on Aug. 26, 2009, which was sustained by the Army on Feb. 12 following a GAO directed review. The FMTV is a series of vehicles consisting of up to 23 variants and 17 different models, ranging from 2.5-ton to 5-ton payloads. Oshkosh now has a five-year, firm fixed-price requirements contract for the production of up to 23,000 vehicles and trailers, as well as support services and engineering. Oshkosh is currently working on an initial FMTV delivery order valued at $280.9 million for the production and delivery of 2,568 trucks and trailers. Oshkosh already produces the Army’s Family of Heavy Tactical Vehicles (FHTV).