“With more than 2500 pounds of thrust, RRL pilots go from zero to full throttle in a fraction of a second and wheels-up in 4 seconds – think NASCAR or Formula One racing in the sky,” explains RRL co-founder Peter Diamandis. “The Targo Racer’s state of the art capabilities give our pilots, which are some of the most skilled in the world, the advanced avionics they need to deliver the most dramatic performance for our fans and sponsors.” The RRL will debut the Targo Racer, a new helmet display developed by Elbit Systems, On April 24, 2010 at the QuikTrip Air & Rocket Racing Show in Tulsa, Oklahoma. 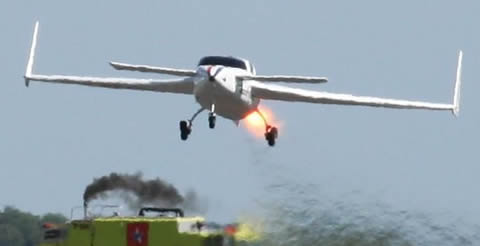 Rocket Racing League (RRL) is a revolutionary new sports and entertainment franchise where teams of highly trained military and test pilots such as former “Top Gun” graduates from the Navy’s Fighter Weapons School, fly rocket-powered aircraft through a 3D virtual Raceway-In-The-Sky (RITS). To be held at venues across the USA, Rocket Racing will feature multiple rocket races, from closed circuit to drag-style racing, pitting 2 to 10 Rocket Racer aircraft roaring head to head for victory. The closed circuit format is planned to be a 4-lap multiple elimination heat on a 5-mile Formula One style raceway in the Sky. The drag style race will feature two Rocket Racers in drag-style side-by-side format. In February 2010 Tulsa was announced to be the first airshow to host this ambitious rocketplane race. Flown by selected pilots with military experience, flying high performance, all-composite X-Racer rocket powered aircraft aircraft. Flight testing of the two aircraft competing in Tulsa were recently conducted at the North Texas Regional Airport (NTRA) in Texas.

“X-Racer vehicles provide a high profile platform to demonstrate our unique Helmet Mounted Avionics (HMA) technology in an environment where pilots are navigating their way through a virtual raceway-in-the-sky in head-to-head competitions,” said Yoram Shmuely, Executive Vice President and Co-General Manager of Elbit Systems’ Aerospace Division. Elbit is one of the RRL partners.

The integrated display helmet provides an essential link between the pilot, aircraft and audience. It enables RRL pilots to receive mission and race critical flight information directly onto their helmet visor within their natural line-of-sight therefore increasing safety and performance. The display shows raceway geometry, altitude, speed, gravitational pull and other parameters directly in front of the aviator’s eyes on a crisp off-the-visor display that adjusts in real time. From a spectator perspective, fans can expect to see the racing action live and in real-time on large projection screens, or remotely, via TV or PC, fed by the Ground and Air Based Augmented Reality Systems and dynamic imagery streams from the Targo Racer and Cockpit-Based Augmented Reality Systems. Additional remote and rocket-mounted cameras will give fans the further sensation of riding right alongside famed RRL pilots.

Targo™ Racer, a variant of the Targo™ family by Elbit systems, is powered by “Helmet Mounted Avionics” (HMA) technology that allows fast and flexible adaptation for unique customer platforms and requirements. The helmet was adapted to the racing environment with the support of RRL’s avionics partner, the University Research Foundation (URF) Maryland Advanced Development Laboratory (MADL).

Diamandis and his team will host a press briefing tomorrow, April 13, reporting on the status of the latest developments related to the Rocket Racing League, the new X-Racer vehicles, the high performance rocket engines, pilots, testing and demonstration schedule, and the featured content for the QuikTrip Air & Rocket Racing Show scheduled for April 24, 2010 in Tulsa, Oklahoma.

The drag style race will feature two Rocket Racers soaring in tandem just 20 feet apart. Fans also see the racing action live and in real-time on large projection screens fed by the Ground-based Augmented Reality System. The fans watching on televisions and PCs at home will experience the thrill of Rocket Racing via unique remote and rocket-mounted cameras that will give at-home fans the sensation of riding right alongside the Rocket Racing League pilots. 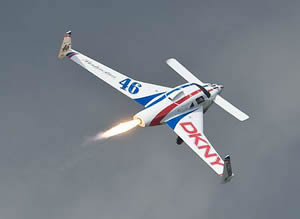 the X-Racer, based on an airframe built by Velocity Aviation, flys at a 300 mph speed, powered by a rocket engine produced by Armadillo Aerospace, burning liquid oxygen (LOX) and ethanol, producing a maximum of 2,500 pounds of thrust. In the future, RRL will include other airframes and propulsion systems to develop the X-Racers. The new pant scheme of the X-racer was unveiled recently, toward the Tulsa Airshow in Oklahoma. Photos: RRL 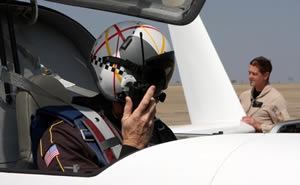 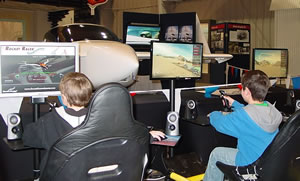 RRL races will offer fans to immerse in the games through a virtual racing league. RRL’s game approach is multi-platform, to attract casual / social players as well as seasoned multiplayer online gamers. Orad, an Israeli real-time special effect specialist responsible for many of the special effects currently viewed on television, is one of the founders of the Rocket Racing League. 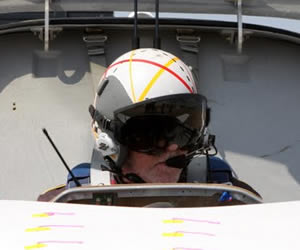