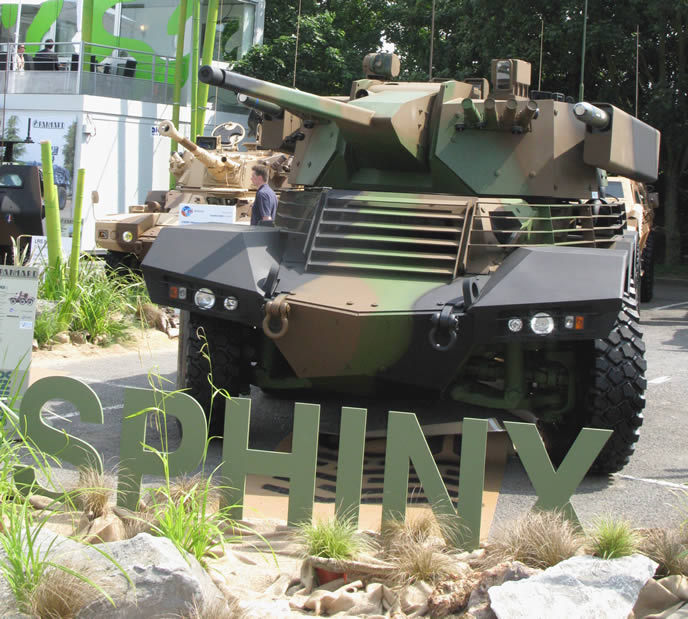 Gearing for the French Army next big programs, vehicle manufacturers at Eurosatory were hopeful to learn about the defense ministry’s selection of the Scorpion system architect, a decision that would have set the program in motion. However, Scorpion, among other French military modernization initiatives fell prey to a 5 billion euro cut in government spending, leaving long lead programs stranded until budget is released. The Scorpion program aims at fielding new families of vehicles replacing aging systems currently operational with the Army light and rapid deployment regiments, with further enhancement of current platforms employed with the heavy regiments (Leclerc Main Battle Tanks and VBCI infantry carriers.) As part of the Scorpion initiative all future elements will become networked, provided with advanced unmanned systems, intelligence gathering, observation and target acquisition, as well as precision guided weapons for combat units and combat support (artillery, mortars etc.)

Three vehicle manufacturers planned to highlight their Scorpion candidate platforms at Eurosatory, but only one (Panhard) actually displayed a vehicle in the open.

Renault has expressed its intention to compete for all three vehicle types to be included in the Scorpion program – the EBRC, to become the armored backbone of France’s rapid intervention force, future, networked troop carrier – VBMR, and the Mine Resistant Ambush protected (MRAP) type armored utility vehicle. One of the configurations is also expected to be a 6×6 armored scout vehicle mounting the CTAI 40mm case telescopic gun. While Renault is mostly recognized for its armored personnel carriers and military trucks, its past experience also included an armored scout vehicle episode – the VBC 90. However, the company has not been too successful with this vehicle, with less than 30 sold mostly to the French Gendarmerie. Panhard has fared better selling 192 ERC-90 F4 Sagaie vehicles, fielded alongside 288 Nexter’s AMX-10RCs, serving the the light rapid deployment regiments of the French Army airborne and marine corps’ wheeled tank destroyer and armored scout vehicle. Both are scheduled for replacement by the ERBC by 2018.

Renault and Nexter have brought Scorpion-related vehicles (EBRC and VBMR) to Eurosatory, displayed ‘by invitation only’ to only a few VIPs. Nexter plans to design its offerings based on the 6×6 XP2 experimental vehicle platform, of which three different configurations are proposed to replace the AMX-10RC and VAB. Nexter has also tested an 8×8 design for EBRC, utilizing the company’s Vextra experimental platform, fitted with a turret mounting a low-recoil 120mm gun that will be firing projectiles and guided missiles. Other turrets considered for Nexter’s EBRC proposed vehicle include a two man turret designed by CTAI, incorporating the 40mm case telescoped armament system with side mounted long-range guided missiles.

Positioned to be the leading provider for the ERBC, Panhard developed a technology demonstrator called Sphinx with internal funds, introducing an EBRC representative prototype enabling the company and the French defense establishment to study the operational functions of the EBRC. The Sphinx was the only candidate shown publicly at Eurosatory 2010. Unlike Nexter and Renault, aiming to compete for more than one platform of the Scorpion program, Panhard visions only at the EBRC, leaving the rest of the competition to other rivals. The company has been identified with armored scout cars for many years. The Sphinx follows the general design of Panhard’s past armored scout vehicles – such as the 8×8 EBR, 6×6 ERC-90 and 4×4 AML-90. Beyond the promotion of Panhard’s offering, Sphinx also provides a risk reduction program, demonstrating the maturity of innovative technologies and solutions suggested for the program, providing an integration platform.