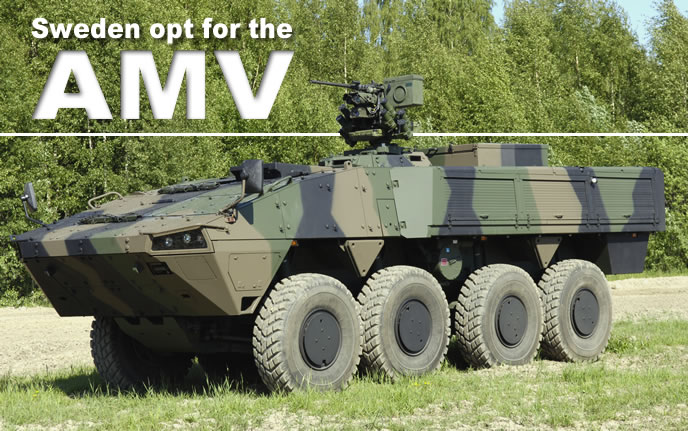 The Swedish Defence Materiel Administration (FMV) has selected the Finnish Armored Modular Vehicles (AMV)  personnel carrier for its future APC, and awarded Patria Land & Armament Oy a contract worth approximately $336 million (SEK 2.5 billion) for the acquisition of 113  AMVs. Five vehicle manufacturers have competed for this contract.

Patria has committed to an offset agreement covering 100% of the program’s cost. Among the Swedish subcontractors are providing protection, automotive, suspension, propulsion and electronic systems for the AMV include Scania, SSAB providing steel parts for the armor and Akers Krutbruk providing the protection suite.

The vehicles will be produced in Finland. First deliveries will be made in late 2013 and the vehicles will become operational with the Swedish Army in 2014. By that time the new AMV will replace tracked vehicles currently in service, including the Swedish produced PBV302, and  Hägglunds BV206(S) and Russian origin MT-LB, as well as several wheeled 6×6 APC variants of the Patria PASI Series. Eventually the FMV could buy up to 150 AMVs, as the former models are fully retired.

AMV has been in production since 2004. Over 1,500 AMVs have been delivered or are on order. AMVs are currently in service with the Finnish and Polish armies which is operating them in Afghanistan. Croatia will become the third operator as vehicles are 124 AMVs are delivered in 2012. The vehicle has also been selected by Slovenia and South Africa and is under evaluation by the UAE.