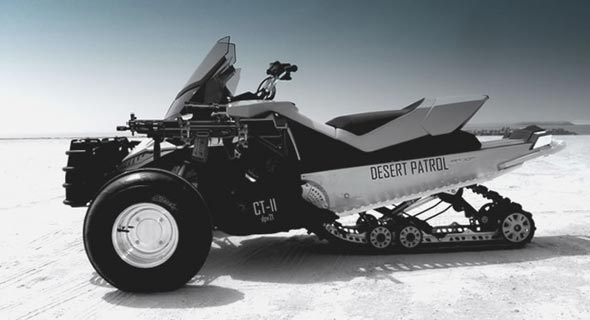 From a Recreational Vehicle Developed for the Emirates’ Royalty,the Tracked All-Terrain Vehicle Turns into a Special Operations Desert Warrior

Where conflicts are waged in remote inhibited and desert lands, mobility becomes a major concern for military planners. Movements are predictable and vulnerable, with convoy restricted to known transportation routes, where they are exposed to IED and ambushes. Elsewhere, security forces and border guards are tasked with exhaustive mission of sealing off long and porous borders in an attempt to block illegal immigration, stop drug smuggling, and monitor pipelines and mines, eliminating theft of oil and minerals. For these tasks and many more, all-terrain mobility becomes imperative.

Defense-Update has reviewed several innovative manned and unmanned platforms, including tracked, wheeled all terrain vehicles, quad ATVs and motorcycles. But the new Sand-X Tracked-all-terrain vehicle (T-ATV), deserves a category in itself. Originally adopted by the emirate’s eliteas a powerful recreational vehicle, it was recently introduced as a desert patrols vehicle, tailored for security and military market, special operations and other military applications.

T-ATV is an ATV category defined by a hybrid traction system combining low-pressure tires supported by a continuous track in the back, providing the traction, adding stability and safety at all speeds, sloped angles and terrain. Like a motorcycle or snowmobile the T-ATV is steered by handlebars. As the name implies, it is designed to handle a wider variety of terrain than most other vehicles.

The tires used on the vehicle can be matched for every terrain while the track, made of tough Kevlar composite, is designed for operation over different types of terrain including deep and dry sand, rocks, gravel and loose dirt, shallow water, mud, snow or ice. The vehicle is said to be much safer for riding off-road or when travelling over pavement and roads. The new militarized model of the Sand-X T-ATV introduced recently is powered by a Rotax 4 stroke fuel-injecting 1,200cc petrol engine, with automatic transmission, operating over ough terrain without refueling at distances exceeding 350 km. Sofar the recreational version of the Sand-X was offered with a two-stroke 800cc engine. The four stroke 1200cc is quieter, and has better fuel efficiency, travelling a range of 350 km with a 42 liter tank. The developer, Sand-X Motors of Switzerland has recently introduced two militarized versions of this recreational vehicle, designed for special-operations, military and security applications. According to the manufacturer, Sand X T-ATV is faster and safer than any other sand vehicle and can carry more gear combined with bigger fuel range for longer range operations.

According to Sand-X Motors, the Sand-X is already in use by several special operations and reconnaissance units of several military forces in the Middle East vehicles and North Africa. While the company has not disclosed the countries using the vehicles, its logistical supply and support centers located in and Algeria, Egypt, Kuwait, Morocco, Qatar and Saudi-Arabia, in addition to the UAE central operations facility.

The motorbike-style Control-handle acts on the two tires on the front-axle. This allows precise tracking and directional control. Furthermore the stability in the roll axis is dramatically increased. The point of gravity is exceptionally low and the Kevlar made track provides optimum grip for precise power and speed control. The risk of roll-over or directional instability is reduced to a minimum with the low center of gravity, and wide stance roll over protection. Furthermore, with a single track providing traction, the Sand-X T-ATV does not need any ground clearance to overcome obstacles. On desert missions teams riding the Sand-X can cross the terrain to the target in a straight line, through dunes, rocks or other obstacles impeding mobility with other vehicles.

Traveling cross country at high speed enables security teams or special forces to save time, effectively chase fleeting targets and control larger areas with fewer forces. The vehicle accelerates from 0 to 100 km/h in less than three seconds, and can reach a top speed of 185 km/h cross country. It can carry a payload up to 300 kg weight, is equipped with extra strong cooling system supporting operations in tropical/desert conditions. 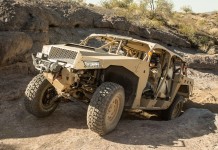 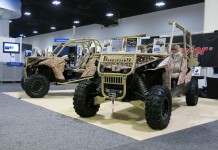