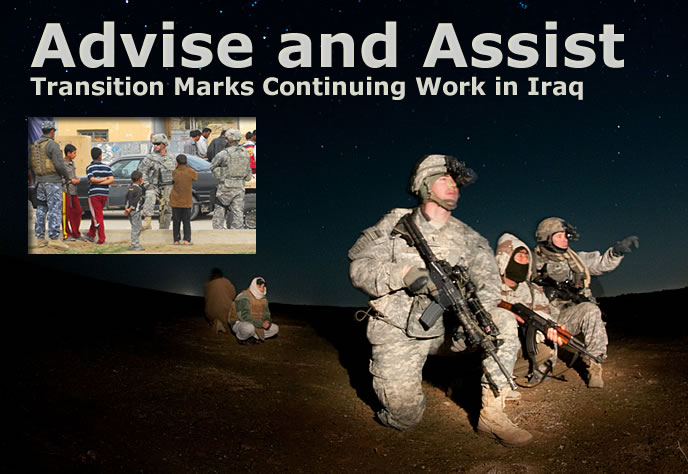 As the last combat unit are leaving Iraq, over 50,000 troops are still in the country.
Capt. Charles Barrett of the 3rd HBCT, 3rd Inf. Div provides an insight of what his brigade is up to…

Cos Kalsu, Iraq – There is no doubt everyone is excited about the last combat troops leaving Iraq, but what about the troops still in Iraq? This has been the burning question of many members of the media and family members of Soldiers still deployed.

Sept. 1, 2010 marks the end of Operation Iraqi Freedom and the transition to Operation New Dawn. It is the symbolic date of a transition from combat operations to stability operations. I say “symbolic” because this change doesn’t happen overnight. I wish it were that easy, but rhetoric aside, you have to account for all the moving pieces of this very fluid environment.


U.S. forces totaled 165,000 in 2008, when the drawdown began. Not long after, U.S. Forces started leaving major urban areas throughout Iraq. Having 50,000 troops in Iraq by Sept. 1 is just the next step in the process, with the concluding with all troops home by the end of 2011.

Within that bigger picture, the 3rd Heavy Brigade Combat Team (HBCT), 3rd Infantry Division was designated as an Advise and Assist Brigade prior to our deployment. Our entire training plan, from Hammer Focus to the National Training Center, was geared toward the brigade’s new mission. We were augmented with transition teams and trained at every level of command and as sections to partner with our Iraqi counterparts.

During our deployment, we have trained on medical operations, intelligence operations, public affairs operations, and the Rule of Law just to name a few. Others have partnered with the State Department’s Provincial Reconstruction Teams (PRT) to assist in building civil capacity. Those projects include drip irrigation for farmers, bee keeping grants, libraries for schools, and progress toward the preservation of historical sites. So although the symbolic transition to stability operations will occur Sept. 1, the 3rd HBCT has been doing just that since they put boots on the ground Oct. 2009.

It boils down to this: having no more combat troops in Iraq does not mean the troops left in Iraq are not combat capable. As outlined in the Security Agreement, U.S. Forces have the right to defend themselves if attacked. It is the mission and the training for that mission which have changed.

Looking at the big picture, it should be easy to see this change is made possible by the successes of U.S. forces and Iraqi Security Forces (ISF). Despite attacks over the past year, we have witnessed the safe passage of millions of pilgrims traveling to the holy cities of Najaf and Karbala during religious holidays. For Arba’een, some reports estimated as many as 14 million pilgrims. This would not have been possible without the success of the ISF.

I believe success – for the Iraqi people and for the U.S. forces who have served in Iraq – is a journey, not a destination, and we should not judge success or failure based on one event.

The first Advise and Assist Brigade — the 4th Brigade Combat Team of the 1st Armored Division from Fort Bliss, Texas — deployed last spring to Iraq, serving as a “proof of principle” for the advisory brigade concept.

The 2nd Stryker Brigade Combat Team of the 25th Infantry Division is based at Schofield Barracks, Hawaii. A combat medic from that unit was killed Aug. 15 when his Stryker combat vehicle was hit with grenades, according to press reports.

Two combat aviation brigades also remain in Iraq, according to Dan O’Boyle, Redstone Arsenal spokesman. Three more are deployed in Afghanistan, where there are currently no Advise and Assist Brigades. (see full article on Army Times)