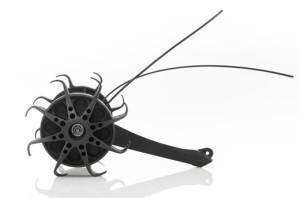 ReconRobotics has introduced a new, versatile add-on to the Recon Scout Micro Robot enabling the use of the robot either as a remotely controlled sensor or static, elevated ‘Pole Cam’. The novel device enables military scouts to mount the Micro Robot on the 20 inch (0.52 m) long ‘Recon Scout Search Stick’, a quipped with actuated jaws that grasp the 1.2 pound Recon Scout micro robot.

The telescopic pole can be extended to 72 inch (1.78 m) in fully retracted mode, enabling scouts to easily see over a 12 foot (3.65 m) wall or into a second story window while maintaining protective cover. Throughout such inspections the robot transmits live video to a handheld operator control unit. The SearchStink can also be used to quietly place the robot at elevated or confined space, where it can then search the location for adversaries, IEDs or other threats. Once the inspection has been completed, the operator can use the jaws on the SearchStick to retrieve the robot.

According to Alan Bignall, president and CEO of ReconRobotics, more than 1,200 Recon Scout Micro Robots are currently operational, and the new device will provide users unique new capabilities to gaining visual access into walled compounds, rooftops, attics, ventilation systems, tunnels and crawl spaces. And because most Recon Scout robots are equipped with infrared optical systems, this visual reconnaissance can be conducted even in complete darkness. “This ‘Know Before You Go’ capability allows tactical teams to quickly and safely clear large multi-level structures before personnel enter these environments” Said Bignall.

Several branches of the U.S. military and international forces have deployed Recon Scout robots around the world, and are employed in route clearing operations, remote reconnaissance and IED inspection. Nearly 200 police and security agencies use Recon Scout robots for tactical reconnaissance, including the many police tactical teams as well as the FBI, U.S. Marshals, Border Patrol, DEA and the Bureau of Alcohol, Tobacco, Firearms and Explosives. When multiple robots are employed simultaneously in the same location, by different agencies, each robot operates on any of three transmitting frequencies, allowing police and military personnel to operate up to three robots in the same environment at the same time.