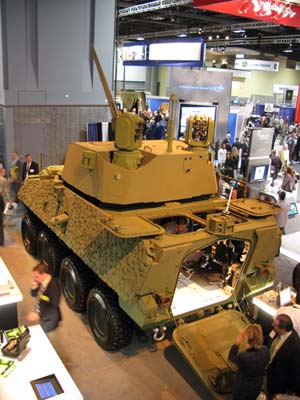 ArmorWorks is introducing at AUSA an innovative 3D camouflage applique called TactiCam that has the potential to reduce vehicle signature in radar, infrared and visual spectrum.
The new material has already demonstrated effective signature reduction in tests and is undergoing optimization. The outer layer of the TactiCam material is shaped in randomly generated three-dimensional pattern displaying varying geometric shapes, in different depth levels.
This digitally generated random pattern surface reflects energy from the vehicle in an irregular pattern, disrupting the detection of the vehicle by electro-optical and millimeter-wave radar sensors.
The material can be applied with infra-red or radar absorbing suppressing materials, and be filled with insulation that can both suppress emissive spectral frequencies, while reducing solar heat gain.

According to Gary Sopko, Director of vehicle programs at ArmorWorks, the new, lightweight material operates passively, and as an insulating layer, also contributes to reducing the thermal signature emitted by the vehicle’s surface, wheels and engine.
Visual camouflage can be applied over the outer layer matching camouflage patterns used by the military or adapted to operational requirements. Sopko added that the TactiCam could eventually be integrated into armor panels in production, or as retrofit to any ground vehicle.
The company plans to include the material with a ceramic basis layer, providing additional ballistic protection to the vehicle. TactiCam was displayed at AUSA 2010 applied onto the improved Stryker wheeled armored vehicle at the General Dynamics Land Systems (GDLS) stand.