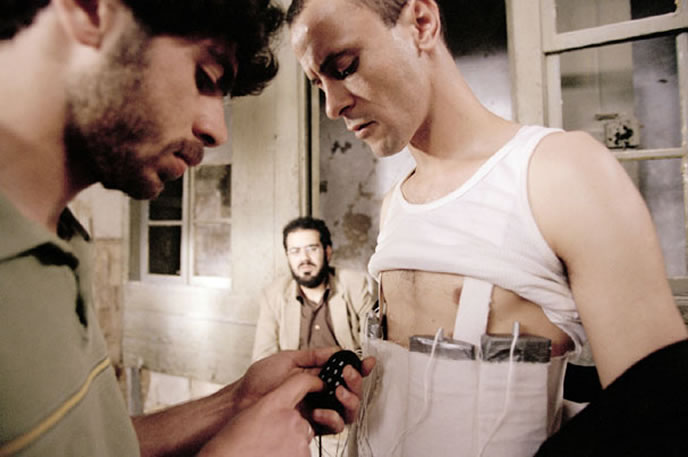 A scene from the Paradise Now

describing a dispatcher preparing a suicide bomber for his mission. (a Warner Brothers film)

Tel Aviv, November 1, 2010: About 1,200 Israelis were killed and almost 8,000 wounded during the 2000-2003 ‘Intifada’ Palestinian terror campaign. Almost half of these casualties were caused by suicide bombers, wearing explosive vests under their clothing, or carrying bombs cached in bags. In addition, 80 were killed by suicide attacks conducted by one, or more terrorists that went on their missions knowing they will not survive.

Suicide terror of the scale of the Islamic terror is relatively a new phenomenon. According to Dr. Lt Col (res) Anat Berko, Criminologist from the Institute for Counter Terrorism (ICT), the Interdisciplinary Center Herzliya, the Palestinian terror groups developed a sophisticated method for identifying, recruiting, and indoctrinating potential suicide bombers by exploiting personal hardships and cultural weaknesses of traditional Arab society. 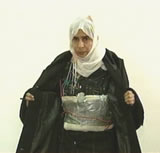 “We are looking for sad people” Berko quoted one of the dispatchers she interviewed for her research. Berko claims that suicide bombers are not acting like anarchists, religious zealots, nor are they motivated by poverty, injustice or revenge, but manipulated by their dispatchers to carry out their act. “The suicide bomber does not act out of suffering or inferior economic status, but rather out of a desire to win social recognition” Berko explains, “These are likely to be socially marginalized people, lacking self-esteem and power to resist. “They are easily spotted by recruiters, considered figures of authority” Berko added.

The reasons driving suicide bombers to their acts are less glamorous – an attempt to redeem clan’s honor, sometime they are totally obsessed by ‘shohada’ thoughts, leading them to seek those who can help them do such an act. Typically, suicide bombers are ‘launched’ to their targets like robots. Sometime the obsessive thoughts turn such a person to perform such a despicable act almost automatically. However, if the process is disrupted – they can ‘wake up’, and regret their act.” Berko added. However, as dispatchers are aware of such ‘risk’, suicide bombers are often equipped with backup communications, enabling the activation of the explosives they carry by remote control.

Dr. Anat Berko works on the subject of Palestinian Suicide Terrorism (Male and Female Suicide Bombers and their Dispatchers). Alongside this, Dr. Berko studies imprisonment and the imprisonment process in both military and civilian prisons. Furthermore, Dr. Berko also researches on women in the IDF, as well as criminology. Dr. Lt. Col. Anat Berko spoke at the First International Homeland Security Conference held in Tel Aviv Israel this week.