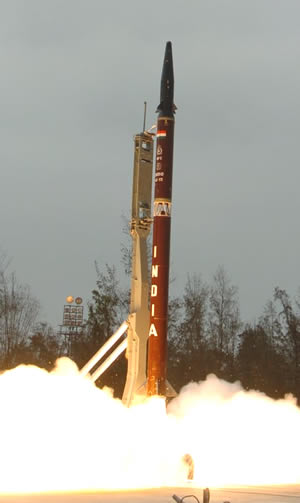 Test launch of India’s latest nuclear capable ballistic missile failed this morning, after the Agni II Plus (A-2) ballistic missile plunged into the Bay of Bengal few seconds after liftoff from India’s Integrated Test Range(ITR) at Wheeler Island at the eastern state of Orissa.

Agni II Plus is a two-stage solid fuelled missile, the most advanced version of India’s surface-to-surface medium range Agni missile, designed to carry nuclear warheads. This model has a maximum range of 3,000 km, 20% beyond the current range of the Agni II Prime (2000-2500 km), while carrying a heavier warhead. It solid-fuel propulsion system is believed to be more efficient and, with the introduction of improved navigation system, is promising to be more accurate.

This is the missile second launch failure in recent months, after another nuclear capable Indian missile Prithvi-II failed to take off during a test fire on September 24. Two test flight of Agni II missile failed last year (May and November 2009). An Agni-I missile was successfully test fired in October 2010.

The Agni missiles family is being developed by India’s Defence Research Development Organisation (DRDO) as a deterrent against nuclear-armed neighbors such as Pakistan and China.

The recent Agni II Plus test is one of several test launches of indigenous Indian missiles scheduled by DRDO for the upcoming weeks. Two previous launches – an Agni I and Brahmos Block III missiles were successful. Another Agni II Prime is scheduled for launch next month, in addition to a fourth attempt to launch the Advanced Air Defence (AAD) missile, intercepting a ballistic missile target. The previous test was scheduled in March 2010 but at the time the missile failed to take off.