Home Land Systems Armored vehicles "The Corps will never be defined by a program, but rather by...

“We ought not to look back, unless it is to derive useful lessons from past errors and for the purpose of profiting by dear bought experience.” (George Washington)

There is no guarantee we will learn from the bloody combat lessons of the last century. The current penchant by some for questioning the Marine Corps’ need for an amphibious tracked vehicle suggests an ignorance of history and a lack of understanding of the future; it is unsupported by hard lessons learned, world trends, and a security environment characterized by a high degree of uncertainty. Our Nation will most certainly require continued global access from the sea, and just as certainly there are forces at work that are actively and aggressively attempting to deny us that much needed access.

The Secretary of Defense clearly stated that his decision to cut the Expeditionary Fighting Vehicle program does not call into question the amphibious assault mission of the Marine Corps. Moreover, he stated the requirement of developing a more affordable and sustainable amphibious tractor to provide the Marines a ship-to-shore capability into the future.

As America’s expeditionary force in readiness, the Marine Corps specializes in rapidly deploying anywhere in the world to develop access through partnership building activities, to create access in response to crises, and to provide the ability to force access to deter and/or defeat threats. The Corps will never be defined by a program, but rather by the capabilities we bring to the fight.

As a maritime Nation the tyranny of distance, geography, and topography remain constant challenges to our global influence. As demonstrated countless times, our ability to come from the sea and overcome the challenges of natural and manmade barriers allows us to protect and defend U.S. interests. Our continued ability to respond is dependent on our ability to operate in uncertain environments, create opportunities and ensure freedom of action regardless of access challenges.

The Marine Corps has learned that amphibious operations should avoid fixed defenses whenever possible. This option is not always available, however. In such cases the amphibious tracked vehicle is essential to success. The tracked amphibious vehicle provides the ability to perform three critical tasks: ship-to-shore movement, breakout from the beach and protected land mobility and firepower. As a result, the amphibious tracked vehicle has been a mainstay of amphibious capability. It has often proven the indispensible, enabling capability that Marines employ to both solve the sea/land mobility challenge and to gain advantage over our enemies.

Recent operational experience and history attest to the effectiveness of amphibious tracked vehicles in providing the capability and capacity demanded by numerous operating environments—permissive, uncertain, or hostile. Most recently, amphibious tracked vehicles assisted in overcoming the devastated infrastructure in Haiti. These same vehicles were used to rescue stranded citizens and deliver relief supplies following Katrina’s devastation of the U.S. Gulf Coast in 2005. In the 1990s these vehicles enabled relief efforts in Somalia during Operation RESTORE HOPE and subsequently provided the key capability necessary to safely withdraw U.N. forces in UNITED SHIELD. During the Korean War they allowed us to project power from the sea at Inchon to reverse the looming defeat of U.S. forces trapped at Pusan. Given the proliferation of area denial weapons among both state and non-state actors, we believe that future operations—even those conducted for benign reasons—will be conducted under uncertain and highly dangerous conditions.

Amphibious tracked vehicles employed from ships at sea provide the means to assure littoral access that no other capability can provide. They are the only combat vehicles built to operate effectively in the littorals: a complex environment of salt and fresh water, muddy marshes and estuaries, and dry land; rural, suburban and urban landscapes; wildly varying terrain; high to low population densities; and temperature extremes. They can quickly and seamlessly transit from ship-to-shore as well as swim rivers and negotiate inland water obstacles, providing the ability to achieve tactical and operational surprise. They protect their occupants as they maneuver on sea and land to a position of advantage and can close with an enemy or rescue our friends. Their known presence off shore historically has been a powerful deterrent and effective capability across the range of military operations.

A modern amphibious tracked vehicle uses the sea as maneuver space, creates opportunities in the littorals, optimizes employment of amphibious forces, and enhances survivability in the face of area denial threats. An amphibious tracked vehicle is the proven means to overcome access challenges, natural or manmade, ranging from tsunami-ravaged infrastructure to an armed aggressor seeking to oppose our maneuver. Amphibious tracked vehicles empower a flexible, ship-borne force to wait off shore for the opportunity to shape the security environment or alter an outcome. This unique capability provides our Nation with a critical power projection asset.

There is no doubt that the sustainment and further development of our Nation’s amphibious capability is important for continued access to strategically vital regions of the world. We see a clear mandate to be ready to shape, influence, deter, and if necessary defeat would be forces that seek to deny us access. Meeting this mandate will allow us to profit “by dear bought experience” rather than repeat the errors of the past.

This article was provided by the Marine Corps Combat Development Command, Quantico, Va. 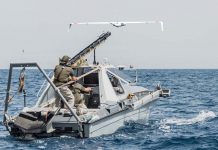 New Mini-Drone Provides ‘Eye in the Sky’ for Small Boats