The U.S. Army is ordering 21,877 Thermal Weapon Sights at an investment of about $195 million. AN/PAS-13 According to the U.S. Army Program Executive Office PEO Soldier, Thermal Weapon Sights (TWS) gives Soldiers with individual and crew served weapons the capability to see deep into the battlefield, increase surveillance and target acquisition range, and penetrate obscurants, day or night. 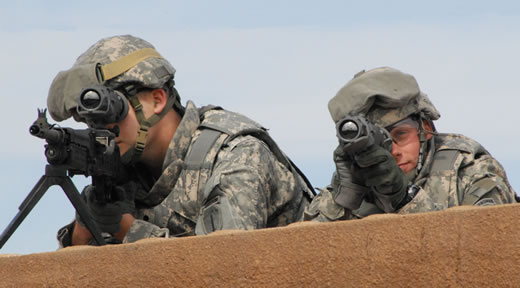 The TWS systems use uncooled, forward-looking infrared technology and provide a standard video output for training, image transfer, or remote viewing. Thermal Weapon Sights are lightweight systems that are mountable onto a weapon rail and operate to the maximum effective range of the weapon.  TWS are providing soldiers in Afghanistan better capability to see and aim at night, or in dark indoors and underground space where Image Intensifier sights do not perform well.

Three TWS manufacturers have recently won orders for this equipment, Raytheon, DRS an BAE Systems have won new orders for Thermal Weapons Sights, under ongoing indefinite-delivery/indefinite-quality contract (IDIQ) contracts with the U.S. Army. Raytheon and DRS have each received orders worth $68 million while BAE Systems received an order worth $58 million. The unit costs represented by the different orders may reflect different types of thermal sights, as the DRS and BAE systems won the orders at unit price of 9922.- and 9670.- respectively while Raytheon is selling its product at a cost of $7630.- All deliveries will be completed by mid-year 2012.