A collection of photos released today by the U.K and French Ministries of Defense illustrate some of the armmament configurations used by tcoalition air forces. These configurations take advantage of the multi-role nature of the Rafale. The fighters deployed today by the RAF included Tornado GR4 which flew combat missions from the U.K., and Typhoons which began deploying from a forward location in Gioia Del Colle, operating with the 906 Expeditionary Air Wing. 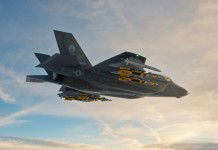 British F-35B Begins Weapons Testing in the US