Pakistan conducted a successful flight test of the indigenously developed Ra’ad Air Launched Cruise Missile (ALCM) also designated Hatf-VIII. According to the announcement made by Pakistan’s defense department, the missile test was conducted yesterday (April 29, 2011) as part of the continuous process of improving the technical parameters of the weapon system. Raad has a range of over 350 km; it is designed to deliver nuclear and has sufficient attack precision (reportedly 3 m’ CEP) to effective deliver conventional warheads, when employed against hardened aircraft shelters at air bases, enemy command-and-control centers or naval targets. The missile provides the country with greater strategic stand-off attack capability on land and at sea.

Developed exclusively for launch from Aerial Platforms, the Ra’ad Missile can be carried by Pakistan’s strike fighters such as the upgraded Mirage IIIEA, which provided the launch platform for the recent test, and, possibly the JF-17 Thunder.

Pakistan was able to recover at least two RGM/UGM-109 Tomahawk cruise missiles launched by U.S. forces against targets in Afghanistan in 1998. The missiles landed unexploded in Southern Pakistan, enabling Pakistani scientists to study the weapons and improve previous designs dated from the mid- 1990s. The development of the Raad ALCM began in 2003 and the first firing took place in 2007. Another cruise missile, the Babur (HATF VII) was also launched in 2005, demonstrating an attack range of 500 km. It later demonstrated flight ranges up to 750 km. 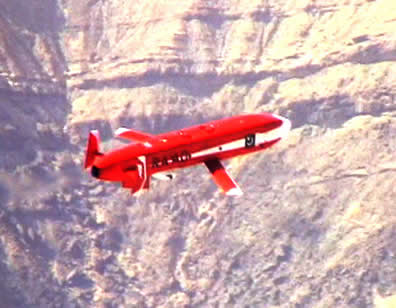