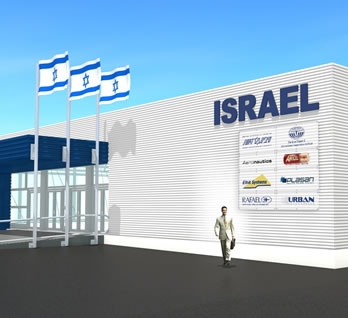 Air and missile defense systems are at the center stage of Israel’s aerospace and defense display at the 49th Paris Airshow. Following the operational success of the Iron Dome counter-rocket system, an emphasis is given to active defense missile and air defense capabilities, including a new, mobile version of Iron Dome, and the Stunner interceptor under development of the next generation David’s Sling air and missile defense system.

According to Maj. General (ret.) Udi Shani, Director General of the MOD, “despite the slowdown of the global economy, in 2010 Israel’s defnse export growth continued, as the industries demonstrated stability, growth and substantial contribution to the national economy, proving once again that our investment in defense provides substantial value for The country’s economy”. Shani added that “The display of Iron Dome, David’s Sling and Arrow, following the successful operational debut of Iron Dome provides a substantial opportunity for such systems becoming a growth engine for Israel’s defense export.”

According to annual records published by Israel’s Ministry of Defense (MOD), the country’s defense exports in 2010 grew to $7.2 billion, up from $6.9 billion in 2009. The total orders backlog off the leading industries increased from $17.3 to $18.8 billion.

Avi Hefetz, General Manager Israel Export and International Cooperation Institute (IEICI) added that the Israel’s aerospace and defense industries sold about one billion US$ in commercial and civil export, representing about 14 percent of the total annual aerospace and defense export. IEICI aims to more than double the share of civil aviation segment in Israel’s A&D export, by increasing the number of exporters, reaching 30 percent over the next three years. Hefetz acknowledged that the total volume of civil aerospace export is increasing year over year, as defense industries expand their portfolio to increase commercial and civil offerings.

15 of Israel’s leading Aerospace and Defense (&D) industries are back at the Paris Airshow. This year marks the 25th time at the world’s premier aerospace event opening in Paris Le Bourget on June 20th. The Paris Airshow Provides the primary showcase for the world’s leading aerospace companies, manufacturers, subcontractors and service providers. As such, it also offers Israel’s aerospace and defense industries an attractive venue for business development. Organized by IEICI in cooperation with the Ministry of Defense, the Israel Pavilion is located at a special building alongside the outdoor static display and in an additional, new location in Hall 3.