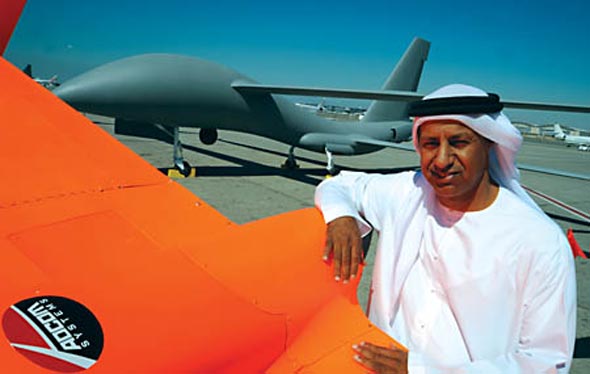 One of the most noticeable UAVs on the flight line at Dubai is Adcom Systems’ United 40. The Abu Dhabi based company unveiled a full scale model of the United 40 featuring a unique tandem-wing, S-shaped fuselage design. According to Adcom, the concept has been in research and development for about four years, AIN reports.

The company has began flight trials with scale models of tandem-wing designs two years ago. The final test vehicle was powered by two small tractor engines mounted on the rear wing, and had a span of six meters. Based on these tests Adcom has now built the full-scale aircraft, and it is intended to fly in the next few weeks.

The tandem wing design offers versatile payload configuration. The incidence of the front wing can be altered to provide pitch control and trim. The wings themselves offer very high lift, resulting in a glide ratio of 1:43. The span is 57 feet 6 inches and the lifting area of the wing is 262 sq ft.

The design is expected to provide takeoff/landing speed could of 33 mph, with high rate of climb.The vehicle has an expected ceiling of more than 23,000 feet. Maximum takeoff weight is around 2,205 pounds, loaded with up to 211 U.S. gallons of fuel, about third of which is stored in the ‘wet’ wings. Payloads can be carried externally under the fuselage, in an internal bay, or in up to four under-wing pods.

The aircraft has a hybrid powerplant, comprising a primary 120-hp Rotax 914UL engine driving a pusher propeller in the tail, augmented for takeoff and climbout by an 80-hp electric motor mounted further forward. (AIN Online)