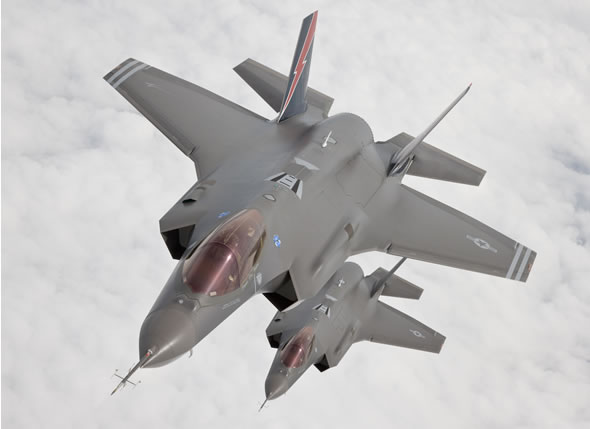 The Turkish government has approved in principal the placement of an order for two Lockheed Martin F-35A 5th Generation stealth fighters, formally ending the debate on whether the country should enter the program without gaining access to fully control the aircraft operating software. Turkey has become one of the world’s largest producer of F-16 fighters and is expected to become a major operator of the F-35, which will precede a somewhat larger, domestically developed multi-role fighter (TFX), to become operational in the mid-2020. Both fighters are expected to replace the F-16 and F-4s currently operational with the Turkish Air Force (TuAF).

Following a meeting of the Defense Industry Executive Committee (SSİK), meeting at the at the Undersecretariat for the Defense Industry (SSM) in Ankara, the Turkish defense authorities cleared the planned order of two F-35 fighter jets, as part of a larger acquisition that could cost up to $16 billion over the life of the program.

In 2002 Turkey has joined the F-35 team as a ‘Level 3 partner’, investing $195 million upfront – more than Canada, Australia, Norway and Denmark. Canada and Australia have already committed to support the program, although the two countries did not place a firm order for the Low Rate Initial Production (LRIP) lots. Denmark and Norway have not yet made their decision whether to buy the F-35 or opt for another fighter plane. The Turkish aerospace industries are expecting to benefit from the country’s partnership in the program. In 2007 they were expecting to gain a work share in excess of $5 billion.

Turkey’s decision comes at a critical time for the program, working out a recovery from delay and cost increases that have spiraled the plane’s cost and lead some of the early supporters to reconsider their plans. Turkey is expected to pay $16 billion for its fleet of +100 F-35s, although due to the current cost fluctuation, the actual number of planes has yet to be determined. Originally Ankara planned to acquire about 116 such planes, and receive its first stealth fighters in 2015, but this delivery date is also questionable due to the program’s delays.

Turkey, like other European program members insisted on receiving access to the new fighter’s source codes, seeking to maintain operational and support independence. However, Lockheed Martin and the Pentagon refused to share these codes, claiming that this ‘independence’ can be gained by interfacing at the application level, rather than lower level source code which would be too costly to manage and would have negative effect on flight safety. Foreign nations are not buying this explanation, fearing the aircraft may be ‘rigged’ with a ‘backdoor’ that would deny them using their fighters on missions that conflict with Washington’s policy.

The recent Japanese and Israeli decisions to buy the aircraft, despite not gaining such access to its operating codes may have convinced other would-be operators that the solution is manageable.