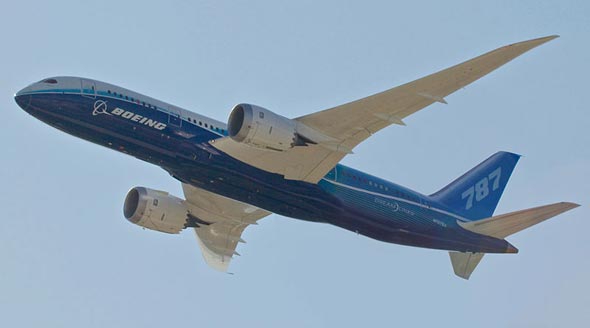 Boeing is displaying its latest mid-size Dreamliner 787 airplane at the Singapore Airshow, emphasizing the new passenger jet’s long distance ﬂying capability. The Dreamliner demonstrated its long-range capabilities a few days ago, ﬂying nonstop from Seattle’s Boeing Field to Bangkok’s Suvarnabhumi International Airport — a distance of 7679 miles (12,358 km). The 787 ability to ﬂy long distance, point-to-point routes appeals to Asian airlines ability to serve direct ﬂights to more destinations, thus avoiding congested hub airports. Because it is made from lighter composite materials, the 787 is the ﬁrst mid-size passenger airplane capable of ﬂying nonstop to many more distant cities without having to go through a hub airport.

That capability for a mid-size jet pleases not only passengers who would no longer need to detour to a hub airport, but also airlines who can establish long-haul routes previously served only by jumbo jets requiring many more passengers to be proﬁtable.

The Dreamliner is in the midst of a six-month “Dream Tour” taking it around the world so customers and partners can experience the revolutionary jet ﬁrst hand.

The 787, the ﬁrst new airplane type of the 21st century, has garnered more than 800 orders from airlines around the globe. Singapore Airlines has 20 of the higher capacity 787-9 on order.