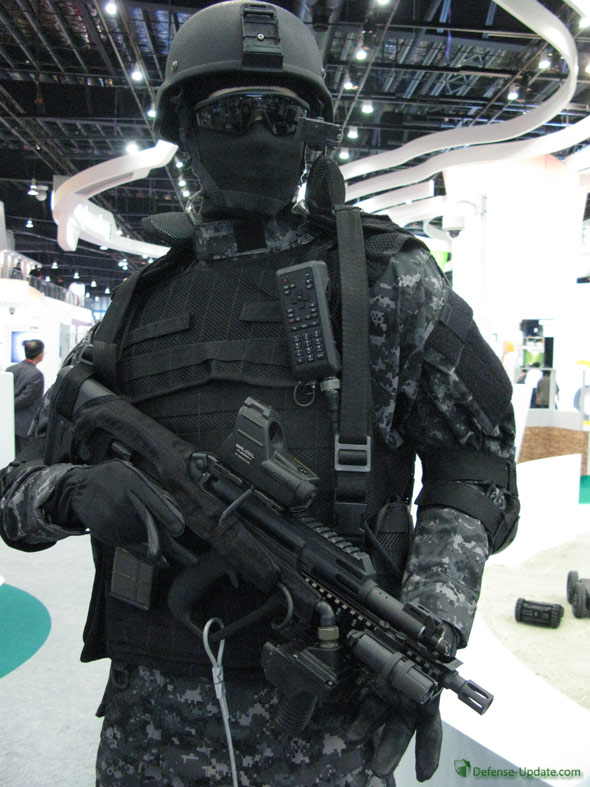 ST Kinetics is displaying two versions of the Advanced Combat Man Systems (ACMS) at the Singapore Airshow 2012. The basic ACMS is currently deployed with Singapore Army units’ with the ACMS Lite version being developed for future applications.

The ACMS Lite was unveiled today at the Singapore Airshow. This design uses the latest ARM processor and mobile communications technology to enhance the soldiers’ networking and situational awareness capability. The new kit, currently in evaluation, includes a smartphone portable device providing mesh-networking communications, processing and display of situational awareness, and support of C2 applications. It will also include fabric cabling integrated into the load Bering vest, offering more reliable and lightweight, low power solution. ACMS Lite is designed to be used by team members and team leaders.

A possible future component of the soldier system is the HELMIS thermal viewer developed by STELOP. The Singapore based JV is unveiling an uncooled thermal viewer at the Singapore Airshow, developed for modern soldier system programs. The main advantage of such thermal viewer over image intensifier viewers is its capability to operate in mixed lighting condition, (no saturation effect) as well as in total darkness (such as underground facilities). Helmis is currently at a prototype stage, expected to be tested with the Singapore Advanced Combat Man System (ACMS) soon. The viewer weighs less than 500 grams, and can be mounted on a helmet or strapped onto a headband as shown its photo. It uses an uncooled 8-12 micron sensor offering 30 degree field of view, supported by a 800×600 OLED display. Operating time is more than four hours.