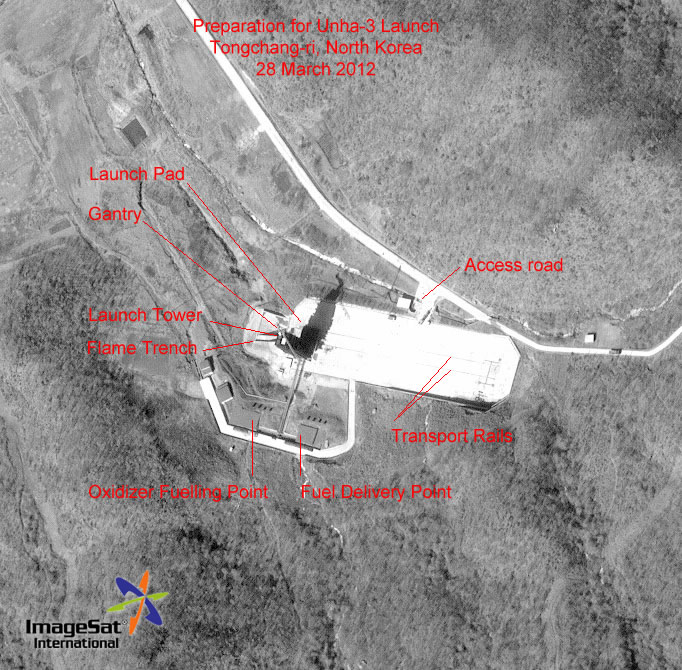 Satellite imagery captured by the Israeli EROS-B satellite on March 28, 2012 show the North Korean preparations for the planned April launch of a North Korean satellite. The test is widely believed to be an opportunity for PyongYang to test its long range ballistic missile technology. The launch is expected to take place at the Sohae Satellite Launching Station, also known as Tongchang-dong Space Launch Center between April 11-16. These exclusive images were provided to Defense Update for analysis, courtesy by Imagesat International.

Few days before the planned launch, the Unha-3 launcher will leave the integration center (below) and be transported to be loaded onto the launch pad, located about one kilometer to the east. This mobile launch pad is already located at the basis of the launch tower, equipped with a gantry to help secure the first and second stages in place. More analysis based on Digitalglobe images from the same day  is available at the 38 North website

Meanwhile, the U.S. intelligence is suspecting North Korea is building a missile that is even bigger than the long-range missile it is preparing to launch the satellite with, the chosun reports from Seoul. South Korean and U.S. officials believe the North will unveil the missile at a military parade on April 15, nation founder Kim Il-sung’s centenary, or on April 25, which marks the founding day of the North’s Army.

A government source here said U.S. reconnaissance satellites recently spotted a 40-m missile at a research and development facility in Pyongyang that is larger than the existing Taepodong-2 missile. “It remains uncertain whether this missile is functional or is just a life-sized mock-up,” the official added.

The rocket North Korea is preparing to launch soon is apparently 32 m long, the same as the Taepodong-2 that was launched in April 2009 with a maximum range of 6,700 km. The new missile is believed to be larger and equipped with a bigger booster that gives it a maximum range of more than 10,000 km, making it capable of reaching the continental U.S.