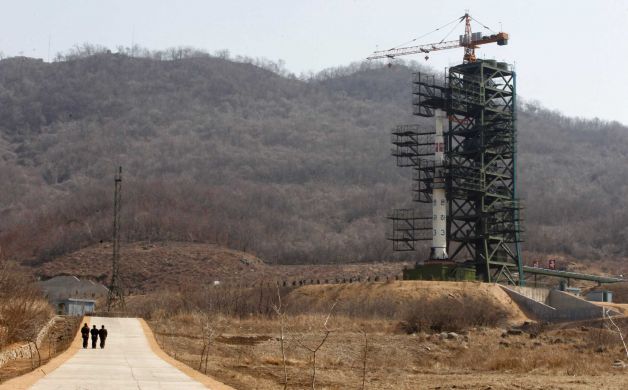 North Korea’s new Unha-3 is now assembled on its launch platform in preparation for a highly controversial satellite launch later this week. And for the first time, the secretive North has granted a select group of international observers an extraordinary opportunity to view the rocket and witness the launch.

Rising to a height of 30 meters and measuring 2.5 meters in diameter, all three stages of the Unha-3 are assembled and clearly visible on the launch platform at the new Sohae Space Center located in the northwestern part of the country at Tongchang-ri on the Cholsan peninsula, a mere 50 kilometers distance from the Chinese border.

Despite claims by the United States and her Pacific allies that this is a dangerous ballistic missile test launch, North Korea insists that the Unha-3 rocket is designed to place an “Earth observation satellite,” the Kwangmyongsong-3, into orbit for scientific purposes. The rocket is scheduled to be launched sometime between 12 and 16 April to commemorate the 100th birthday anniversary of the nation’s founder, Kim Il-Sung. Should this launch be successful, it would go far in reinforcing the image of the North’s new leader, Kim Jong-Un, and would be a major boost to North Korea’s desire to be recognized as a nation of influence and power.

According to Jang Myong-Jin, Director of the Sohae Space Center, the satellite will enable the North to accumulate scientific data needed to analyze and manage the nation’s agricultural pursuits, forest preserves, and natural resources. Jang told the assembled observers that the launch had been planned long ago and reiterated that the launch is not a missile test, but a peaceful scientific endeavor. Jang also voiced the North’s stance that, as a sovereign nation, they had every right, and indeed, a responsibility to develop a level of peaceful scientific technology many other nations now enjoy.

When asked the cost of the North’s rocket program, Jang failed to provide any monetary measures, but insisted that hunger was not a reason to ignore the need to acquire advanced technology that could help his nation enter the ranks of the developed nations.

International observers invited to view the rocket, mostly journalists, were transported to the space center aboard a special train to get a first look at the rocket, a white spire of 91 tons featuring distinctive lettering spelling out “Unha-3” in blue, a North Korean flag, and apparently lacking only installation of the satellite and final fueling to be fully ready for launch.

Although restricted to viewing the Unha-3 from a distance of 50 meters, the journalists were allowed a much closer look at the Kwangmyongsong-3 (Shining Star) satellite. The satellite was described as being a box weighing 100 kilograms fitted with five antennae and solar panels to power electrical components.

Jang also told the assembled journalists that final fueling would begin soon. The form of liquid fuel favored by the North is widely believed to be difficult to store in above-ground tanks for an extended period of time because it is highly toxic and extremely corrosive. This also makes it necessary for fueling to be delayed until only a few days before launch.

Jang, to assuage any fears neighboring nations may have, also informed the journalists that the rocket was equipped with a self-destruct mechanism that could be activated at any time the launch appeared to deviate from its targeted trajectory or failed to perform as designed.

In his comments, Jang also told the assembled journalists that the North had every intention of expanding its space program with plans to conduct future launches of vehicles weighing as much as 400 tons. The North has also issued a warning that any interference or shoot down of this rocket would be met with severe retaliation and “merciless punishment.”

Japan and South Korea have already deployed missile batteries and Aegis-equipped warships and placed their armed forces on high alert in response to this rocket launch. Both nations previously gave their forces the go-ahead to shoot down the rocket should it appear to represent a danger to property or life. The US has also deployed missile-capable forces and high-tech surveillance assets in the Pacific as a “precautionary” measure to deal with this situation.