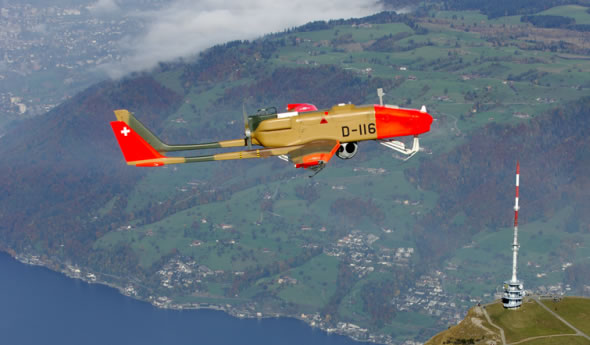 The Swiss defense acquisition authority Armaswiss has shortlisted two Israeli Medium Altitude Long Endurance (MALE) unmanned aerial systems (UAS) for the next generation Swiss reconnaissance drone. The Heron 1 drone from Israel Aerospace Industries (IAI) and Hermes 900 proposed by Elbit Systems were the two systems shortlisted by the Swiss evaluation team, out of 11 potential systems considered for the program. Flight evaluation is expected in Switzerland in September and October 2012, following to the submission of formal proposals by the two companies in August. Final selection is expected by early 2014. Funding for the acquisition is included in the Swiss 2015 defense budget, Aviation Week  reported.

Both systems are designed to cope with weather conditions better than average MALE UAS, equipped with automatic takeoff and landing and deicing systems, enabling the UAS to fly through icing conditions that have already caused several losses to similar platforms in the past. Both UAS are currently operational with the Israel Air force and by several operators worldwide. The Swiss military has no current plans to arm the unmanned aircraft.

The Swiss military is currently operating the Ranger Model 95 reconnaissance drone (also designated ADS 95), custom designed UAV developed by IAI and under Swiss based RUAG. This model will reach the end of its operational service life. The new MALE UAS will offer significantly longer endurance and better payload capacity, and are expected to yield lower operational cost, compared to the current Ranger.

The current ADS 95 drone system is operated by the Swiss Air Force in support for the Swiss Army and Air Force, but it also makes a valuable contribution to civil security, for example in assisting the border guard and police.