The US Air Force has decided to terminate the Blue Devil II Airship (BD2) project. Air Force representatives have given the prime contractor, MAV6 LLC, notice to discontinue work on the program due to ‘unacceptable performance’ and ‘recurring failures to meet minimum operating standards’.

Blue Devil II was initially scheduled for rapid deployment to Afghanistan in February 2012, only 18 months after contract award.

After the Air Force assumed responsibility for BD2 from the Army Engineer Research and Development Center (ERDC) back in early 2011, it’s first official act was to try to kill the BD2 effort in favor of a conventional fixed-wing UAV program, but with supporters in Congress and the Office of Secretary of Defense (OSD) the program was kept alive. To date, the airship has not achieved the first test-flight status.

MAV6 LLC, a once promising newcomer under the leadership of two retired US Army generals, has been unable to deliver on its promises for the Blue Devil II program. Built at a cost of $211 million by TCOM LP, the airship was projected to be capable of operating a 2,500 pound payload of intelligence-gathering sensors and equipment including the Defense Advanced Research Projects Agency’s Autonomous Real-Time Ground Ubiquitous Imaging System (Argus). A version of Argus has been placed in use aboard the A160T Hummingbird unmanned ISR aircraft. The airship was planned to carry two individual Axsys video balls able to deliver high-definition video imagery. In addition to other equipment, the USAF was exploring the possibility of also fitting the airship with the “Pennant Race” signals-intelligence collector, an enhanced upgrade of a system now in use aboard the MQ-9 Reaper.

The Blue Devil II represented the second phase of a two-phase program that began with the original Blue Phase I Airship. The Blue Devil I system has been operating in Afghanistan, mounted aboard a Beechcraft King Air 90 turboprop, to collect intelligence data. Blue Devil I relied on a wide-angle camera and equipment designed to track ground targets, specifically focused on tracking individuals.

Airships designed for war zone deployments have created a flood of interest in recent years and Blue Devil II was one example senior Defense officials believed held great promise and might prove to be an excellent vehicle to deliver much needed intelligence data while parked in the open skies over Afghanistan.

The complex development effort to build the world’s largest UAV and most advanced multi-sensor processing system was not the only obstacle MAV6 faced, company officials claim. A hostile government customer, sweeping government-imposed requirements changes and persistent funding constraints constantly eroded the program eventually bringing it to a halt.

As technical difficulties mounted and development costs increased, the Air Force gradually scaled back the range of work MAV6 was authorized to continue. While under Army management, the Blue Devil II program was initially estimated to be delivered at a cost of $137 million, but after the budget was transferred to the Air Force, the scope of the program was reduced and subsequently, the budget scaled down to $86 million, an estimate that was obviously more wishful thinking than anything else as a recent Air Force analysis estimated the costs to be much higher with an operating cost that might exceed four times the funding awarded to MAV6.

MAV6 agrees that there was cost overrun in the program, but blames the Air Force for delaying the acquisition process “We did underestimate the complexity and scale of the effort,” MAV6 official comments, but it wasn’t only the company to blame for the problems, “It has been the Air Force’s failure to fund Mav6′s BD2 contract in a timely manner that has represented the biggest impact to the program.” company officials commented in the ‘Edgefighter‘ blog post. “It took almost a year for the Air Force to definitize Mav6′s contract – almost six months longer than the maximum time limit stipulated by the Federal Acquisition Regulations. During this period and despite that fact that Congress provided the Air Force with full funding for the BD2 program, Mav6′s ‘undefinitized’ contract was incrementally funded in small blocks. This constraint made it impossible for Mav6 to fully staff the BD2 development effort or fund subcontractors and vendors.

MAV6 said the program has incurred only 12% cost growth over the $86 million, which, according to MAV6, will bring the total investment to just above $126 million for the M1400 to reach flyaway status, well below the original $137 million originally budgeted for this quick reaction program. MAV6 claims it has already accumulated 90-95% of the M1400 development effort and are months away from first flight. “To date, the U.S. taxpayers have invested $150 million (more if you include funds executed directly by the Air Force) in development of the BD2 capability… ” MAV6 said. The company complained that after the initial move by the Air Force to terminate the BD2 program has failed, the Air Force demanded ‘wholesale changes’ to the BD2 development plan, including the new requirement for FAA flight certification for the unmanned M1400 airship, without providing additional funding for these tasks. This requirement is not exclusive for MAV6, since 2010 it became mandatory for all vehicles flying in national airspace. in contrast, MAV6 is contesting this claim, saying UAS as well as manned combat aircraft (such as the F-16, F-22 or F-35) are not subjected to such requirements although they transit in national airspace.

The Air Force has also been critical of the program, detailing cost overruns, design complications, overweight tailfins, unexpectedly complex avionics, software glitches, and a failure to integrate the Argus system with other onboard systems have all contributed to the decision to terminate the project. The Air Force also included no request for Blue Devil II funding in its 2013 budget request. The Air Force intends to use the project’s remaining funds to disassemble, pack, and transport hardware and parts to a storage facility.

David Deptula, MAV6 CEO and formerly the Air Force’s chief of intelligence, was naturally disappointed and not in full agreement with the cancellation saying that the decision “not to capitalize on this game-changing potential now may be penny-wise, but pound-foolish.” Contrary to the Air Force decision, MAV6 claim they can continue the program with the remaining budget and complete it within the FY 2012 funds. “There is over $50 million in remaining FY12 BD2 funds to support completion of the M1400 airship and operational demonstration of the BD2 capability.” MAV6 officials said.

Regardless the Air Force decision to terminate the program, Blue Devil II is not dead yet. Airship type platforms were never too popular within the Air Force, yet they provide important advantages for ground and naval operations, particularly supporting persistent operations. The Army is currently managing a competing program (LEMV) developed by Northrop Grumman, which has also lagged behind schedule.

LEMV is scheduled to begin flight testing in June 2012. Upon completion of the flight testing the airship will fly to Florida to be outfitted with a custom gondola containing its mission payloads. By early 2013 it is expected to deploy to Afghanistan, to support coalition forces there.

Blue Devil II was considered a more affordable alternative for $517 million LEMV, and as such, its mere existence should reduce the risk of airship-based persistent surveillance platforms. Therefore, a possible use of the remaining budget would be to transfer it from the Air Force to other agencies, ‘inside or outside DOD’, where its unique capabilities will be more appreciated, therefore keeping Blue Devil II on ‘life support’ until the fate of LEMV is determined.

Aeroscraft – Mega Airship Back in the air in Tustin, California 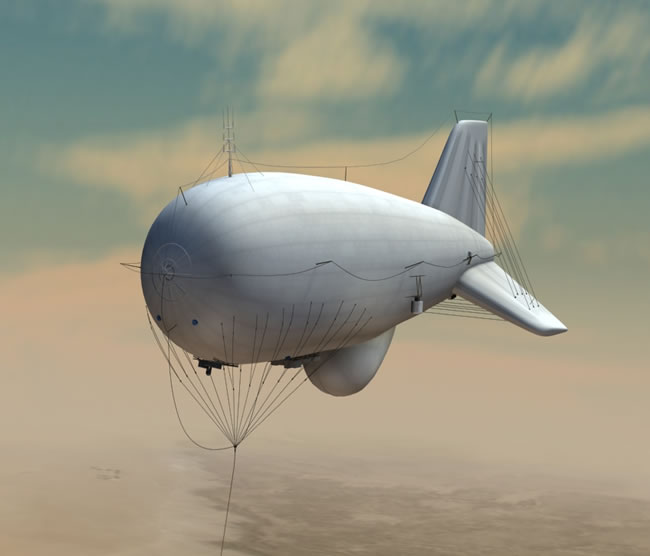