Russia could be buying more unmanned aerial vehicles from Israel as part of a new $50 million package negotiated with Israel’s third UAV manufacturer Aeronautics. Russia has been a customer of Aeronautics since the early 2000s, with first acquisitions of Aerostar UAVs and Skystar aerostats in 2004-2006 for homeland security and law enforcement applications. In 2010 Russian authorities ordered three Orbiter systems for law enforcement applications, as part of a $3 million order. The current package includes 24 Orbiter Mini-UAV systems, each including two or three aerial vehicles and a ground control segment.

According to foreign sources, Russia and its neighboring southern republics have been steadily growing customers for Israeli UAS. In recent years Russia has placed a $53 million order with IAI, for Searcher Mk. 2 and I-View Mk150 tactical UAS systems and BirdEye 400 mini-UAV systems. Additionally, Moscow was reported to be interested in building the heron I UAVs in Russia, under a $300-400 million multiyear acquisition program.

The Russian interest in Israeli UAVs evolved after the 2008 war with Georgia, where Georgia used Hermes 450 and Skystar UAVs obtained from Israel in the years 2004-2007. The interest in Israeli UAVs evolved among all the Southern Republics since the mid 2000s, partly in support of securing pipelines delivering oil westwards. According to Azeri and other foreign sources, Aeronautics has been the first to seize this opportunity, delivering 10 Orbiter and Aerostar tactical UAS systems to Azerbaijan in 2005. It was followed by the delivery of eight Hermes 450 systems by Elbit Systems, in 2010. One of these UAVs was shot down over the disputer Armenian territory of Nagorno Karabach a year later (see video below)In 2009 Aeronautics moved to establish the Azad assembly plant in Baku, producing UAVs for domestic use and, potentially for export.Elsewhere in the region, foreign sources mention Kazakhstan has also received Orbiter UAS as part of a large-scale artillery modernization package bought from Israeli manufacturers while Uzbekistan is believed to be operating an unknown number of Hermes 450 systems obtained from Elbit Systems in recent years. The company was reported planning to establish a support center in the country. 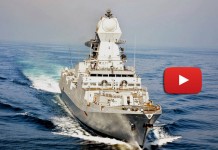 Poland is interested in an Indo-Israeli naval air defense systems