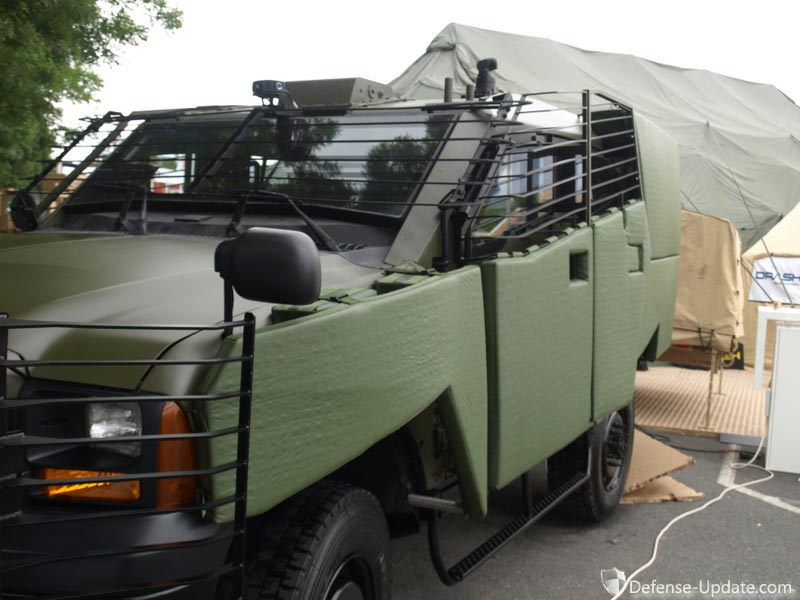 The new ‘soft skin’ applied to the VAB Ultima vehicle displayed at Renault Trucks Defence’s yard is a new RPG protection is believed to be Plasan’s FlexFence, adding higher protection form RPGs. While the new protection is also based on ‘statistical defeat’ of the RPG warhead, Plasan claims that due to the unique composition of FlexFence it defeat RPGs with higher probability than any other statistical armor. Plasan is displaying here the latest version of FlexFence, claimed to be even more effective than the previous version. The new version has recently performed live firing tests, where it repeatedly demonstrated multi-hit capability (stopping several RPGs aimed at the same module).

According to Plasan, the lightweight FlexFence offers the lightest weight counter RPG armor available today. Its durability has been proven in testing in complex terrain, like jungle, thick brush and wooded areas, where other protection concepts such as nets will not survive. The FlexFence is applied over the existing armor, without changing the vehicle’s width or silhouette, maintaining the vehicle’s ballistic protection while adding counter RPG armor.