Hawaii became the focus of the largest Pacific naval exercise on 29 June as international navies converged on the islands to begin Rim of the Pacific 2012. This is the 23rd exercise in the RIMPAC series and promises to be the largest ever.

The US Pacific Fleet hosts the RIMPAC exercise every two years in Hawaiian waters and the surrounding environs. The series began back in 1971 and has grown in size every year since.
RIMPAC is the largest and most comprehensive maritime warfare exercise in the world. Asian-Pacific nations are routinely invited to participate as a means of improving the coordination, cooperation, and interoperability of Pacific naval forces. The exercise is designed to enhance regional stability, encourage cultural understanding, maximize training opportunities, and promote Pacific maritime relationships.

With 42 ships from five nations forming the seaborne element, the aircraft carrier USS Nimitz (CVN 68) and other ships of Carrier Group 11 form the centerpiece of this year’s exercise. Also participating are six submarines and more than 200 aircraft as well as personnel and units from 22 nations in all.

And for the first time, many of the American ships will be powered by a 50/50 biofuel blend of regular fuel oil and a select mixture of hydro-processed fuel derived from cooking oil and algae. The US Navy is reported to have bought some 425,000 gallons of this biofuel at a cost of $12 million for use in this year’s exercise, the largest single biofuel buy in history. Some aircraft are also expected to be fueled with an aviation-grade biofuel blend as well. The US Navy has invested considerable funds in emerging technologies using algae, recycled cooking oil, sugar, corn, and other staple crops to produce biofuels that could help reduce the Navy’s dependence on fossil fuels.

Another first being introduced in this year’s exercise is the placing of naval and air commands under the leadership of international partners. Russia is also making its debut appearance in this year’s exercise, a decision that may have been prompted by growing concerns regarding China’s growth and military modernization.

Other scheduled exercises include ship-sinking operations, torpedo training, and experiments with new seaborne vessel designs. RIMPAC 2012 is scheduled to wrap up on 5 August.

Following is a photo collection congratulating the foreign visitors, some regulars other – first timers, in Pearl Harbour. 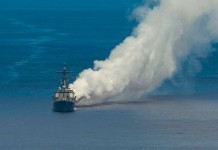 US Report Recommending Hosting of US Carrier Force Rejected by Australia

Stennis Carrier Group Departs on a Mission to the Persian Gulf