Heavily armed militants stormed the Pakistani air force base Minhas before dawn on Thursday (Aug. 16, 2012), sparking clashes that left 10 people dead and raised concerns about the safety of the country’s nuclear arsenal. In the ensuing gun battle, Taliban fighters positioned outside the base’s main gates launched rocket-propelled grenades at security forces as they attempted to stop the would-be suicide bombers from reaching the military aircraft. In the end, Pakistani forces were able to repel the Taliban assault, but only after calling for reinforcements from Pakistani commando units and police forces stationed nearby, according to news reports. Eight Taliban fighters and one Pakistani soldier were killed in the battle.  The attack demonstrated the Taliban’s  ability to penetrate a sensitive military sites in Pakistan, five years into an insurgency.

Despite rumors that nuclear weapons were stored at the base, US officials said that the country’s nuclear stockpile were never in danger of falling into Taliban hands. Pakistani military officials also confirmed there were no nuclear weapons being housed at Minhas. The base is located within the country’s Kamra Aeronautical Complex, the air force research and development facility.

“The Pentagon continues to work closely and on regular basis with Pakistani counterparts towards the safety of their nuclear program.” Pentagon Press Secretary George Little said the DOD leaders remain convinced that Islamabad’s vast nuclear arsenal is safe. “It is our sense that the Pakistani government maintains good security around their nuclear arsenal,” he said. 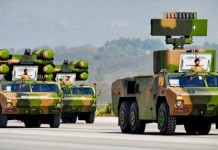