The six submarines on order are mainly intended for anti-shipping and anti-submarine missions in relatively shallow waters. The first sub, named ‘Novorossiisk’, was laid down in August 2010, and is scheduled for delivery to the Russian Navy next year. It was followed by Rostov-on-Don, launched in November 2011 at the Admirality Shipyard. Both Stray Oskol and Rostov-on-Don are scheduled to enter service with the Black Sea fleet – the first in 2014 and the second in 2016.

Originally, the Russian Navy wanted the Project 677 Lada class sub, the lead submarine, St. Petersburg was laid in 1997 and went to sea in 2004.  After eight years of trials, the Navy decided to terminate the project and opt for an updated version of the proven 636 design, which dated back to the 1990s to modernize its 17 ship fleet of Project 877 ‘Kilo’ class diesel-electric submarines. An export version of the Lada named ‘Amur-1650’ is currently on offer to India, for their 75i submarine project.

Project 636.3 submarines are designed by the Rubin Central Design Bureau for Marine Engineering. Unlike the Lada, which could take an Air Independent propulsion (AIP) cell. Rubin’s designers did not include AIP in the ‘Varshavyanka’ class subs – like the Kilo class they will succeed, will be powered by diesel-electric power-plant. Proven integration of AIP was one of the main advantages  of French and German submarines marketing in recent years.

Unlike nuclear propulsion that cannot be shut down at will, diesel electric and AIP powered submarines produce low acoustic signature and, therefore, are most suitable for littoral warfare where their presence can be easily masked against the shallow sea bed. Russia was long a pioneer in AIP design but in the last decade Western European nations have taken the lead. Russia expects to have its own AIP in production within three years. The Russians are developing a new submarine propulsion engine that would enable extending submerged endurance capability by 1.4. Once it matures, Rubin’s designers are hopeful their Project 636 could theoretically be upgraded to make use of this technology. However, according to Andrew Dyachkov, a director at Rubin, it is likely that better electrical batteries employing  lithium-ion technology will deliver better endurance, at a lower risk and lower cost.

Although absent of AIP, the ‘Varshavyanka’ offers an improved version of the proven Kilo class, featuring advanced acoustic ‘stealth’ technology derived from the Kilo and Lada designs. The submarine uses anechoic tiles  to absorb sound waves emitted by active sonar, thus reducing probability of detection by surface vessels, anti-submarine aircraft or enemy submarines. These tiles help attenuate sounds emitted from inside the submarine, adding its ability to shut-down the diesel engines when submerged, it reduces the range by which the sub may be detected by passive sonar.

The vessels, crewed by 52 submariners, have an underwater speed of 20 knots, a cruising range of 400 miles (electric propulsion) with the ability to patrol for 45 days. They are armed with 18 torpedoes and eight surface-to-air missiles. The Improved Kilo submarine is armed with six 533-mm torpedo tubes (the vessel carries 18 torpedoes or 24 mines) it is also capable to launch the SS-N-27 Club-S land attack cruise missiles. For self defense the submarine is equipped with Strela-3M or Igla-1 man-portable Air Defense missiles (MANPADS).

The Russian Kilo class submarine has been a success story in both domestic and international markets. 4 such subs were completed since 1982. 17 such submarines are in operation with the Russian Navy, 12 with China’s People’s Liberation Army navy (PLAN) and ten with the Indian Navy. Other operators include Algeria (4) and Iran (3), Romania (1) and Poland (1). The Admirality Shipyard is currently building six Project 636M subs for Vietnam. The first will be launched August 28, 2012. Delivery is expected this year, following a series of trials at sea. In 2008 Vietnam signed a US$2 billion deal to buy the six Project 636M Kilo class submarines from Russia. All subs are scheduled for delivery by 2016. Thanhnien 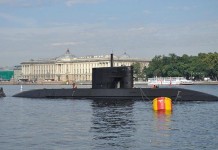 Research: With 150 New Submarines to be Built until 2021, the Submarine Market Seems to be on Solid Ground