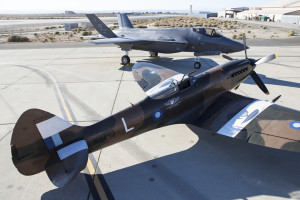 Along with the extensive testing of the growing F-35 fleet at Edwards AFB and elsewhere, the United Kingdom Lightning II Test and Evaluation Squadron at Edwards AFB found time to celebrate their own “Battle of Britain Night”. This event brought the F-35 Lightning II together with the World War II era Spitfire from the Commemorative Air Force display team which joined the celebration. The attached gallery shows some pictures taken on September 14, 2012 on this unique celebration.