The Indian Air Force is planning to embark on a tri-service wide upgrade of its Israeli-supplied unmanned aerial vehicles (UAVs), as part of an unprecedented program that could cost up to one billion US$. Indian military services are already operating more than 150 UAVs, mostly Searcher Mk II and Heron I procured from Israel Aerospace Industries since the early 2000s.

The upgrading program is likely to introduce new technologies developed in the past decade, particularly in more compact, capable and reliable avionic equipment, improved propulsion (currently provided with Searcher Mk III). As for the Heron, modern configurations are currently deployed with satellite link, providing for better performance over mountainous terrain and at longer range. Part of the Indian Herons, particularly the new batch, are likely to be equipped with such capabilities and the upgrade will bring other platforms up to date, thus simplifying maintenance and support.

To learn about the new the modernization offered for these UAV , Sign up for Defense-Update Premium Account

The Indian military currently has about 100 searcher Mk II and 50 Heron I drones. Since the initial fielding of these drones India has not attempted to equip drones with weapons, but New Delhi has clearly indicated it has the plans and is investing the resources to obtain combat UAV capabilities.

In parallel to the upgrading of its UAVs, The Indian Air Force is preparing for the induction of the first ‘suicide drone’ wing, utilizing the Harop loitering weapons obtained in 2010 from Israel. The first of 10 HAROP units is expected to become operational in 2013. India is already operating the radar suppression variant of the weapon, the HARPY. 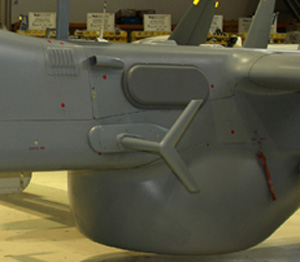