The most ambitious land combat system development program currently underway is the US Army’s next generation Infantry Fighting Vehicle – known as the Ground Combat Vehicle (GCV). Two industry teams are developing vehicle prototypes for the Army evaluation under the program’s $900 million 24 month technology demonstration (TD) phase. Through this phase the Army will have the opportunity to compare how a new generation combat system fare against current systems and platforms. One of these technologies is Hybrid Electric Propulsion.

Although the Army hasn’t committed to Hybrid-Electric Drive (HED) propulsion, this technology is already shaping the future requirement in a new way. The first opportunity for the US Army to truly evaluate this trend is the upcoming selection of Ground Combat Vehicle (GCV) expected in four years time. The Army will have to choose between two alternatives – a conventionally propulsion (diesel, proposed by GDLS) and HED-driven one (proposed by BAE-Northrop Grumman). QinetiQ developed the Ex-Drive based HED utilized in this vehicle and the lithium-ion (Li-ion) battery bank is supplied by Saft.

BAE Systems claims a combat vehicle powered by HED will be 10-20 percent more efficient than diesel powered alternative, it will also offer faster acceleration and maneuvering, and higher degree of fault tolerance, through system redundancy and reduction in moving parts.

“HED is a system solution for the constant demand for increasing electrical power,“ said Mark Signorelli, Vice President and General Manager Vehicle Systems at BAE Systems, this is not merely a mobility solution, as it responds to requirements for more available power, more power generation and higher voltages independent of the HED application. According to Signorelli HED is already a mature system, proved for years as highly reliable propulsion for locomotives, bulldozers and heavy mining machines.

While the HED is positioned as a lightweight and compact alternative to existing transmissions, the entire HED GCV application would weigh 140,000 pounds (70 tons). Adding the full protection suite, the Army considers the weight scale up to 14 ton heavier, setting the weight limit of the GCV TD at 84 tons. The Army and BAE Systems engineers are confident this weight could be reduced with further optimization, BAE Systems executive said, stressing the advantages the system could offer.

Signorelli said the HED benefits to the GCV would contribute reduction of 40 percent in moving parts, corresponding to significant improvement in reliability. Ex-Drive gear system built by QinetiQ The absence of reverse gear will also contribute to higher reliability and improved performance. This system offers a compact and lightweight solution for electric drive tracked vehicles based on an optimal combination of electrical and mechanical components. This is achieved through efficient packaging, mechanical transfer of steer power, range-shift mechanisms and permanent magnet motor technology.

The Ex Drive gear system will require only three-speed system, versus the current six speed mechanical gear, eliminating three sets of planetary gears. The clutch pack and torque converter will also be eliminated as well as high-pressure hydraulic controls for those systems. In fact, according to QinetiQ, the Ex-Drive developer, a mere 15 percent increase in transmission mass has delivered an increase of 85 percent of the torque available to move the GCV. This means more power on demand for faster acceleration and smoother low-speed movement, supporting operation with dismounted troops. The traction drive system will be half the weight of equivalent mechanical systems. The HED consists of two diesel generators, providing redundant capability in case one engine is hit. According to BAE Systems assessment, the dual engine architecture could reduce system abort failures from 1,106 failures experienced in traditional (diesel) systems to only 272 in HED, a potential 75 percent increase in reliability.

To assess the benefits of HED for the GCV, BAE Systems is building a ‘Hot Buck’ test set representing the vehicle’s HED system, t. This system will include the dual diesel generator sets, transmissions and brakes, cooling, exhaust, energy storage systems, controls and software. These systems will be integrated into a chassis—like test fixture and tested against dynamometers to gain an understanding of the systems’ performance, reliability, verifying the system’s maturity for TRL 6 at GCV design weight.

Saft, the designer of ultra-high-power cells for the vehicle’s hybrid electric drive system, says it has already completed the demonstrator Energy Storage System (EES) including hardware and software. The system is charged by an MTU diesel engine, which directly runs the propulsion system when operating in full power. Overall, the GCV HED system will be able to deliver 1,500 horsepower and provide up to 1,100 kilowatt of electrical power to drive on board and external electrical systems. The EES utilizes ultra-high-power, high-voltage VL 5U cells, supporting the vehicles’ electric drive system when the vehicle is not running on gasoline, such as during silent watch missions. 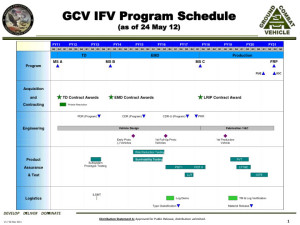 The Army has also evaluated a number of existing platform, to asses the potential benefits a new platform could bring. In 2012 the Army evaluated a range of modern combat vehicles from domestic and foreign makers, including BAE Systems (M2A3, Turretless Bradley and CV-9035), GDLS (Stryker DVH) and Israel Defense Forces (Namer). The Army already determined the protection suite to be used with its future vehicle would result in a heavy platform (70-84 tons), that most likely will require a tracked vehicle. The weight variance is attributable to the propulsion system used. The vehicle proposed by the GDLS uses the latest version of the proven MTU 883 diesel engine and an Allison transmission (both are also proposed for the M-1A2 SEPV2 ECP), resulting in a gross vehicle weight (GVW) of 64-70 tons. Future commonality with the M1A2 tank powerpack will also contribute to lower sustainment costs over the lifespan of the two vehicles. BAE lead team offers heavier, yet more efficient hybrid-electric propulsion that weighs 70-84 tons (depending on the armor configuration). The alternative vehicles weigh less, but do not provide the protection level required for the GCV. The Israeli Namer, the closest peer weighs around 70 tons.
Please note all tons mentioned in this article are US (short) tons, converted to 0.892 Long Ton (UK).