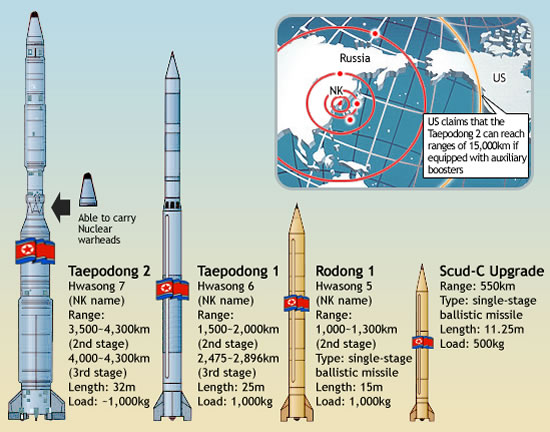 An unnamed representative of North Korea’s Committee of Space Technology has released a statement announcing the possibility that the North’s rocket launch scheduled to take place sometime between 10 and 22 December is likely to be postponed.

The statement was carried on Pyongyang’s official Korean Central News Agency (KCNA) cited no specifics behind the possible launch delay. The Space Technology spokesman did state that the launch team was in the final stages of launch preparation, but offered no additional details.

Satellite imagery has provided photos that indicate that inclement weather and heavy snow may be the underlying cause for the delay. Many reputable analysts are speculating that the delay may be a combination of foul weather and technical malfunctions. Some experts also believe that the delay may be the result of intense international condemnation and the threat of impending UN sanctions.

This latest in a string of rocket launches was initially scheduled to occur between 10 and 22 December, in all probability to mark the first anniversary of the death of the North’s former leader, Kim Jong-il, on 17 December. The timing of the launch also coincides with elections scheduled for 13 December in Japan and 16 December in South Korea, a coincidence that some analysts have called suspicious.

Satellite images have confirmed that the three-stage rocket is fully assembled on the launch pad, but is not known if the rocket has been fueled for the launch yet. Should the launch proceed as announced, the rocket will lift off from the Sohae Space Center located in Cholsan County, North Phyongan Province and follow a flight path traversing open waters between the Korean Peninsula and the Chinese mainland before dropping the second stage off the coast of the Philippines and then entering Earth orbit.

A previous launch from the Sohae Space Center on 13 April of this year heightened tensions in the region before failing dramatically. In four attempts to launch a three-stage rocket since 1998, Pyongyang has consistently failed to put a satellite into orbit.

The United States and Japan, in preparation for the launch, have completed deployment of at least five Aegis-capable guided-missile destroyers to strategic locations that will enable a shoot-down of the rocket or debris should they appear to endanger life or property along the flight path. Japan’s Prime Minister, Yoshihiko Noda, gave the Japanese Self-Defense Force (JSDF) a shoot-down order on 6 December.

Japan has also positioned Patriot Advanced Capability-3 (PAC-3) missile batteries on the Okinawan islands of Miyako and Ishigaki located in the East China Sea, on the principal island of Okinawa, and near Japan’s Ministry of Defense’s headquarters in Tokyo.

Japanese Defense Minister, Satoshi Morimoto, announced that JSDF forces already deployed will remain on alert for at least the next two weeks.

Japan’s Meteorological Agency is forecasting that weather conditions in and around the Sohae Center is expected to be generally fine through most of the coming week and winds are expected to be relatively moderate. A cloud cover is expected to gradually intensify in the area as the week progresses. Frigid temperatures and heavy snowfall have inundated the region during the past few days.

While it is possible to launch a rocket during a moderate snowfall, freezing temperatures, strong winds, or severely reduced visibility could prove severe enough to postpone a launch.

Most experts are of the viewpoint that this launch has been rushed and the North has had insufficient time, only eight months since the launch failure in April, to identify and correct the deficiencies that caused the previous failure. Although most everyone anticipates another failure, a successful launch would create considerable discomfort within the international community as it would represent a significant leap forward in the North’s rocket technology. Such an advance could then be fine-tuned to develop an operational intercontinental ballistic missile (ICBM), a potentiality the United States and her Pacific allies are not likely to accept without opposition. 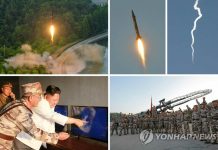