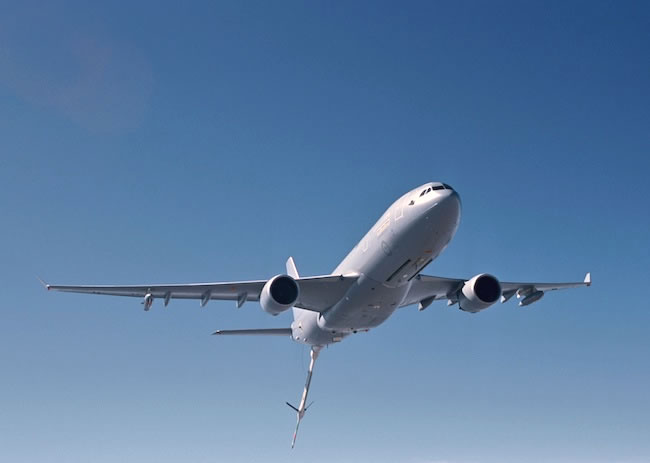 Airbus Military has confirmed that it has been selected by the Government of India as the preferred bidder to supply its A330 MRTT Multi Role Tanker Transport to the Indian Air Force (IAF). The IAF plans to buy 12 additional tankers – six will apparently be the A330 and the remaining six could be either A330 or IL78 (which lost the current competition). Detailed negotiations will now begin which it is expected will lead to the award of a final production contract for an envisaged six aircraft in 2013.

India´s selection of the A330 MRTT makes it the fifth nation to commit to the type following Australia, Saudi Arabia, the United Arab Emirates, and the UK, which have ordered a total of 28 aircraft. It was the second time India selected the A330 – the former tender in 2006 was cancelled after disagreement between the IAF and the Indian Finance Ministry.

The decision was formally announced this week, followed the unofficial announcement of Airbus as Lowest Bidder (L1) on the tender in November 2012. Although the base price of the competing IL78 was lower, the A330 proved to be more efficient and lower cost in terms of total life cycle support spending. According to the IAF, the twin-engine A330 outperforms the four-engine Russian IL-78, offering more economical high altitude cruising, which significantly lowers its operating cost. The estimated value of the A330 MRTT program  could exceed US$2 billion. The IAF evaluated the aircraft performance through extensive flight demonstrations in India, where the MRTT refuelled multiple types of IAF fighters and operated from the high-altitude IAF base at Leh.

The A330 MRTT is provides a large and efficient platform for aerial refueling and military transport. Derived from the successful A330-200 airliner the aircraft has an internal fuel capacity of 111 tons (245,000 lb). The aircraft is offered with a choice of air-to-air refueling systems, including an advanced aerial refueling Boom System developed by Airbus Military and/or a pair of under-wing hose and drogue pods, plus an optional fuselage refueling unit, enabling simultaneous refueling of up to three fighter aircraft.

The A330 MRTT can also be used as a pure transport aircraft, carrying 300 troops or a payload of up to 45 ton (99,000 lbs). It can also be converted to accommodate up to 130 stretchers for medical evacuation. The tankers will operate from the Panagarh Air Base in the eastern state of West Bengal, supporting Su-30MKI fighter jets, extending their operational range well beyond the Himalayas.