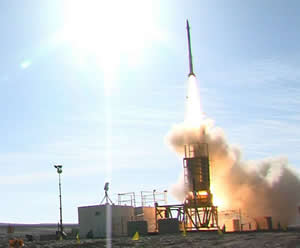 This intercept will be followed by gradually more complex testing, leading toward operational fielding. The first David’s Sling unit will stand up in 2013 under the IAF active defense branch, its technical cadre already undergoing training at Rafael. Through 2013 the new unit will train the first cadre of operators for the new system, leading to the system’s initial operational capability in 2014. This is an excerpt version of the full article ($), available to our premium subscribers. To subscribe please follow this link

For a fixed cost, Stunner would provide far more capabilities than any alternative approaches that would cost four times or more. A simulation of a hypothetical threat from a country possessing long and intermediate range ballistic missiles clearly demonstrates the case for the new Israeli missile. According to the assessment, a ballistic missile strike force comprising 600 SCUD type missiles and 200 long-range missiles, fired from 60-70 TELs could launch tens of missiles could be launched in quick succession over a few minutes. Many could be heading toward critical assets, while the impact points of few others are uncertain, thus requiring complex threat killing strategies.

Two defense strategies were compared. One, investing a billion US$ in current missiles, each worth around $4 million, the country would get around 240 interceptors. Attempting to intercept the threat, defenders will be required to launch at least 60 missiles to repel the attack, expending 25% of the nation’s defensive assets, against 10% of the enemy inventory. With this strategy, the country’s defensive shield will run dry in the fourth round.

In contrast, opting for David’s Sling only, or a mix of David’s Sling and existing interceptors, the same budget could buy 600 David’s Sling interceptors and 100 of the more expensive ones, saved for special purposes. In this case, less than 10% of the defensive shield will be spent to repel the threat (ten ‘golden missiles’ and 50 Stunners) and defenses would be maintained until the attacker runs out of missiles.