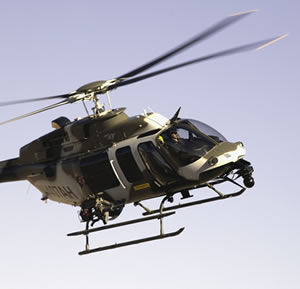 Bell Helicopter has introduced an armed version of its 407GX commercial aircraft at the Heli-Expo 2013 trade show in the United States. The armed variant of the Bell 407GX can be armed with light munitions and precision weapons, including laser-guided rockets and missiles. The new helicopter is positioned to meet the growing interest in the US and abroad for armed scout helicopters, particularly, as a replacement for the ageing OH-58 Kiowa Warrior.

“The 407GT is a ‘force multiplier’, with mission capabilities ranging from tactical air assault and troop escort to reconnaissance and search and rescue,” explained Danny Maldonado, Bell Helicopter executive vice president, Sales and Marketing. According to Bell, a variety of optional kits, designed to meet the needs of any tactical mission, will be available for the Bell 407GT with export compliance approval as required. Such Kits could include the AGM-114 Hellfire, General Dynamics GAU-19/B .50 caliber machine gun, HMP-400 machine gun pod, M260 2.75 in. 7-tube rocket launcher, Advance Precision Kill Weapons System (APKWS), LifePort Armor Protection System and more. Under the 407AH variant, the company’s first commercial variant qualified as a weaponized/military platform, Bell is also offering important safety features including a rupture resistant fuel system, engine exceedence monitoring and a collective mounted throttle that keeps power at the pilot’s fingertips.

The UWP, derived from the battle-tested Bell OH-58D Kiowa Warrior, provides a stable platform for precise delivery of ordnance and can be quickly reconfigured for machine guns or rockets. The pylon can also be easily removed to meet multiple mission requirements such as search and rescue or medical evacuation. Light munitions capabilities of the 407GT include Dillon M13D Mini-guns, .50 caliber machine guns or 2.75 in. rockets, as well as laser-guided weapons featuring a standoff range of more than 5,000 m. 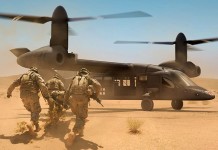 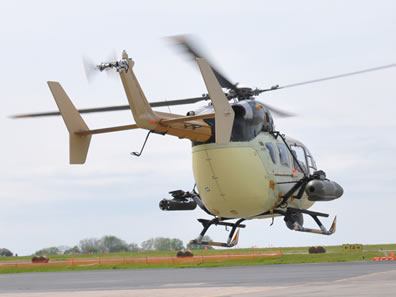