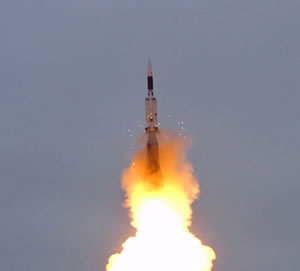 The Italian Army and French Air Force carried out yesterday a successful intercept of a ballistic missile target, testing a European missile defense architecture based on the European SAMP/T missile defense system.

The recent intercept test of a theater ballistic-missile target by the MBDA SAMP/T employed NATO standard communications environment for the first time, where integration with NATO Ballistic Missile Defense Operations Center (BMDOC) at Ramstein, Germany could be established via Link 16 data-link. THis configuration is similar to what would be the future NATO ATBM mission, under the aegis of the alliance ALTBMD program. On the recent tests the Aster 30B1 missile scored a direct hit on the target.

The target, an Israeli RAFAEL Black Sparrow missile was launched by an Israel Air Force F-15 deployed from Cazaux, north of Biscarrosse. AFter takeoff, the F-15 turned to the Atlantic ocean and launched the target missile toward land, as it has done many times on Arrow intercept tests in Israel. The missile flew about 300 km on a ballistic trajectory representing a theater ballistic missile. Once target was acquired by the ARABEL multi-function radars of the two SAMP/T units, battle command committed one of the fire units to fire the ASTER 30B1 missile which scored a direct hit on target. This was the second time of 13 test successful flights that the ASTER 30B1 scores a direct hit. The test campaign began in 2005 and the system has been deployed with operational force since 2008.

The test conducted at DGA Biscarrosse missile tests center was performed by the fourth Artillery regiment of Mantova (Italy) and the French center of military & aviation testing (CELM) of Mont-de-Marsan. The successful test represents another milestone for the SAMP/T system in its capability to counter missile threats under NATO’s future missile defense architecture. It follows two previous tests successfully completed in October 2010 and November 2011 against the same type of threat.

The  The SAMP/T is a joint Franco-Italian air and missile defense system based on the MBDA Aster 30 interceptor. As the only non-US built long-range air defense system contributing to the NATO Alliance capability against ballistic threats, SAMP/T  is the cornerstone of the European contribution to the evolving European missile defense architecture. French and Italian governments have committed to contribute to NATO ATBM defence with SAMP/T systems.

Eurosam has delivered to date 14 units to Italy and France, including 2 First of Class units. France will deploy 10 SAMP/T in 5 air defence squadrons, 4 of which are currently equipped or being equipped. The Italian Army will regroup 5 SAMP/T units in one Regiment, in Mantova, with 4 already delivered.