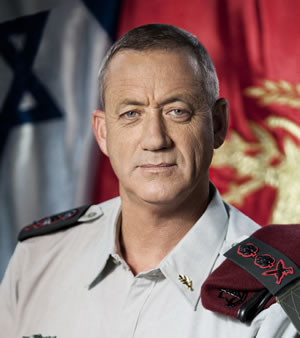 Lt. Gen. Benny Gantz, Israel Defense Forces (IDF) Chief of the General Staff, provided a briefing on the “Challenges to Israel’s National Security.” earlier this evening at the 13th annual Herzliya Conference. “In the past 2 years we’ve learned that if there’s one constant, It’s that there are no constants” said Gantz. “We have a multi-arena challenge with different features … The influence appears different in operational form. Gantz said, “The chances of war against us in the visible future are low but there is a high probability of deterioration … Not a week goes by, not to say hardly a day, when I don’t have to deal with an issue that you didn’t even hear about, that could have resulted in a strategic threat. He said that Syria is one type of threat, Lebanon another, Sinai a third and Gaza “has always been there and always will.”

Looking ahead to potential future conflict, Gantz said, “We will need to go into “the tunnels of Gaza, into the fox holes and the villages … We can’t only play video games … it requires physical presence on the ground and that’s what we need to prepare our forces for … We need to make sure we are flexible enough and are able to adapt ourselves to the new situation.” While the IDF’s latest five-year plan waits approval by the new Israeli government, Gantz said proposed investment would focus on improved capabilities for precision attack and ground maneuvering warfare. Gantz cited seven priorities for the upcoming multiyear plan:

Touching on the topic of the size of the army, Gantz said that the army would be streamlined and made leaner and stronger. “It’s not a question of the size of the army but the magnitude of the challenge. We need to adapt the organization to the challenges that faces it. We need a “Faster army, a quicker army, a more lethal force, better equipped, better trained and more suitable in size.” The most important principle, he said, was not to have a ‘hollow army’.

The IDF is expected to reduce its manpower,
discharging career soldiers and officers by “tens of thousands.”

Forced by budget cuts, the IDF is expected to reduce its manpower, discharging career soldiers and officers by “thousands.” over the next five years; “We have to ensure that the right people are in the right places at the right times,” he stressed, referring to the recruitment of ultra-orthodox jews, being a highly debated and political charged issue. Gantz said this process should be done through a slow and gradual process which has sofar proved positive to the army.

Referring to the threats Israel is facing, Gantz noted that in the past Israel had seen Lebanon and Syria as “one arena, two fronts,” and followed the idea of “why fight with each of the terrorists when you can impact them” via Assad. But today Syria is “liquid, unstable, dangerous.” Lebanon, on the other hand, is more stabilized than before, “There is the same instability there that was there all along.” He added “The state responsibility that Hezbollah has taken upon itself is not something I’d dismiss lightly…”“The Syrian army is attacking itself in huge numbers … at the same time we see the terror organizations which are gaining footholds in the territory.” He noted that these organizations are currently fighting against Assad but “Guess what, we are the next inline … We are liable to be the next challenge of those organizations … Amazing strategic capabilities in the hands of Syria can end up in the hands of the terror organizations” and if they have these capabilities, there is a “a very big chance they can use them against us in the future.”

Security is also deteriorating along the Egyptian border. After 40 years of quiet, Gantz said that Egypt was a “situation in the making … Sinai is fertile ground for activities against us … Fertile ground for terrorists.” He said that a future danger of a military threat can gain momentum at any moment. “We didn’t fall asleep on the job, we have prepared the infrastructures.” Gantz stressed, “Egypt has an interest to maintain security in the Sinai … Not for us, for them … We will do whatever we can to maintain quiet in the area but we must understand that area in a state of flux.”

As for Gaza, following an intolerable prior situations, four months after Operation Pillar of Defense it was clear that “the goal of that operation was completely achieved” as could be seen from the absolute quiet in the south, save for one incident which was under investigation. “We have to distinguish very, very clearly between the inflammatory declarations and what it’s actually doing,” said Gantz. “We are prepared just as we were to act should it become necessary.” Gantz concluded.