Israel’s top three defense industries have reported about their financial performance in 2012 in the past week. Elbit Systems, RAFAEL and Israel Aerospace Industries (IAI) all performed well last year. Elbit gained momentum with record revenues of US$2.88 billion and net income of 168 million; operating profit also improved, compared to 2011. 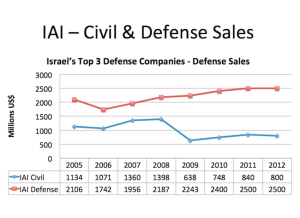 IAI reported sales of $3.3 billion in 2012, holding the level of defense sales it has maintained since 2010. while IAI’s sales continue to grow, sales to the commercial market are stagnant, after the drop in demand for business aircraft since the 2008 financial crisis and slowdown in aircraft conversion in past years.

These difficulties and the business environment are pressing the companies net profit, that has reached $69 million in 2012, eroding for the second year. The company also reported negative cashflow of $294 due to delay in advance payments from customers that missed the past quarter report.

RAFAEL’s sales dropped slightly in 2012, from $1.945 to $1.775 Billion; the company attributed the decline to accounting policy related to a significant deal that is undergoing contract updates. In fact, the company reports order increase or 449 million in 2012, up 23% over 2011.

The aggregate backlogs reported by Israel’s top 3 companies reach nearly US$20 billion, reflecting a healthy flow of business to the country’s defense sector and hundreds of subcontractors depending on the market leaders for their lifeline. The