Brazil maintains stable and amicable relationships with its neighboring countries, and has not engaged in any major armed conflict with another nation in over 50 years. Nevertheless, as a regional power Brazil is investing significantly in defense and security. Currently modernizing its defense equipment, Brazil is expected to spend US$241.41 billion on defense during the period 2012-2017.The country is vast and geographically diverse and is home to the Amazon River and rainforests. It also has large reserves of several natural resources, and has recently discovered substantial oil reserves. The country‘s defense procurements are largely focused on the protection of its substantial resources from illegal mining, deforestation, and drug trafficking.

The Brazilian Ministry of Defense aims to decrease its dependence on foreign OEMs (original equipment manufacturers) and enhancing its domestic defense capabilities. As such, it prefers to procure defense technology from foreign OEMs, which is then constructed by domestic defense companies. This provides domestic defense firms with technology and equipment which they can integrate into their existing systems. The technology procured has assisted the development of the country‘s aeronautical industry, and continues to provide the Brazilian defense forces advanced attack helicopters, light attack aircraft, and air cargo transport systems.

There are attractive opportunities expected to emerge during the forecast period in the Brazilian defense industry, as Brazil will seek to procure fighter jets and components for the development of its indigenous transport aircrafts, submarines, and satellite-based imaging systems to help protect the Amazon region. 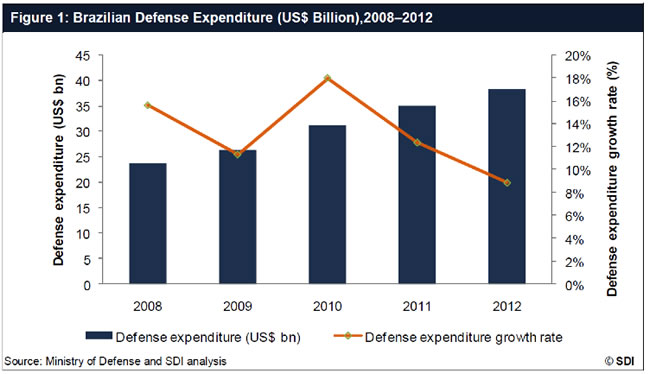 Brazil is expected to increase its aircraft exports, supported by increased technology and component procurements from Europe

Although Brazil is currently a net importer of arms, it has focused considerable attention on developing its indigenous defense manufacturing capabilities through offset-enabled technology transfer. Germany is the leading supplier of arms to Brazil, and it mostly supplies components for the manufacture of aircraft and submarines. During the forecast period, the country will continue to focus on the indigenous development of its aerial refueling, air cargo transport aircraft, and diesel-electric submarines, which will lead to an increased demand for importing components.

The Brazilian defense export market is expected to expand, fueled by the sale of its indigenous air cargo transport aircraft, in which a number of countries have expressed an interest. The Brazilian manufacturing companies Embraer and Helibras, which specialize in the manufacture of light attack aircraft and helicopters, are global leaders in defense production. These firms specialize in the creation of superior quality customized defense systems, and are a popular choice for developing countries as they provide an affordable alternative to advanced fighter planes.

Brazil adopts a competitive bidding approach for both domestic and international acquisitions. In addition to compliance with the defense requirements, a bidder must offer the lowest price with the maximum technology transfer to win a defense contract from the country. Any defense deal worth more than US$5 million has an offset obligation equivalent to 100% of the contract value. The main entry strategy for foreign OEMs is through the direct offset route, which entails the transfer of technology to local companies and the manufacture and assembly of systems in Brazil. However, a number of foreign OEMs have established manufacturing bases in Brazil, in order to capitalize on its low labor costs and availability of raw materials. As such, Brazil is considered to be an export hub for Latin America.

In order to promote Brazil‘s domestic defense industry, the majority of its arms imports deals include technology transfer obligations. However, a number of defense firms are either reluctant to share proprietary information or are prohibited by their country’s policy on the transfer of technology. This requirement has been a key deterrent for foreign OEMs entering the Brazilian industry. Foreign OEMs have also been deterred by Brazil‘s relatively low defense budget allocation for arms procurements, set at 7.5% of the total defense budget in 2012.

Foreign suppliers also face significant delays in the approval of defense deals, as the Brazilian Ministry of Defense takes a considerable amount of time in evaluating offset agreements. This results in constant revisions of offset agreements by bidders attempting to win contracts, which leads to further delays in contract approvals.

Order your copy of ‘The Brazilian defense Industry’ market research