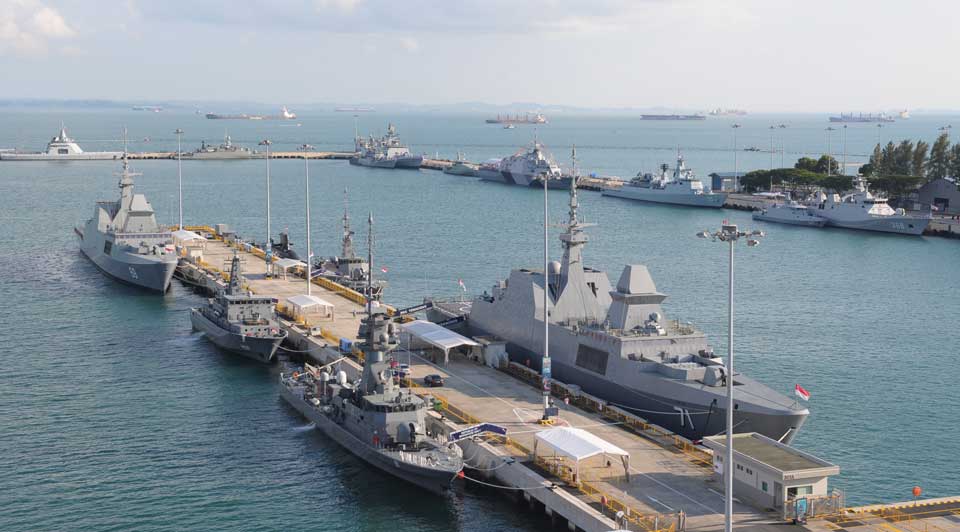 Changi Naval Base, Singapore: 15 warships from nine countries around the world, including the latest patrol vessels, frigates, corvettes and destroyers, sailed into Singapore for the Warships Display at IMDEX Asia 2013 this week. The US Navy’s first ever littoral combat ship, USS Freedom, in its maiden overseas deployment, was among the warships at Changi Naval Base.

In the background, left is Ladroite, the French experimental OPV, with the Royal Thai Navy HTMS Rattanakosin (F441) to its right, the Shivalik class Frigate INS Satpura (F48) and Kora class Corvette (P62) INS Kirch, both from India. The Australian Armidale class Patrol Craft HMAS Bathurst is seen by the side of the USS Freedom, the first Littoral Combat Ship of the US Navy.

The Malaysian frigate KD Lekiu frigate (30), Indonesian KCR 40 class patrol craft KRI Kujang [642] and Diponegoro Class Corvette KRI Frans Kaisiepo [368] are closing this impressive line up at the Changi Naval Base in Singapore. Two vessels from Singapore are filling in for the two vessels that were scheduled to arrive from South Korea.