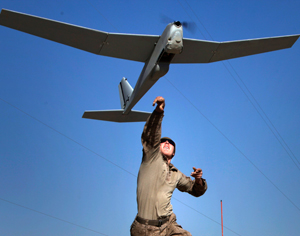 This ‘Restricted category’ certification marks the first time the FAA has approved a hand-launched unmanned aircraft system for commercial missions.

The U.S. federal Aviation Authority (FAA) certified the Puma AE Small Unmanned Aircraft System (SUAS) built by AeroVironment Inc. as a “Restricted Category” aerial vehicle, approving the small drone for commercial missions, supporting oil spill monitoring and ocean surveys, in the North Slope region of the Arctic. AeroVironment expects Puma AE to be deployed later this summer to support emergency response crews for oil spill monitoring and wildlife observation off the coast of the Beaufort Sea in the Arctic Circle.

“We believe initial operations in the Arctic can lead to long-term broad adoption for similar applications elsewhere in the United States and throughout the world” Tim Conver, AeroVironment chairman and chief executive officer said. The FAA stated in its announcement that previous military acceptance of the Puma AE design allowed the FAA to issue the Restricted Category type certificate.

“Aerial observation missions can now be safely accomplished in hazardous Arctic locations, which will reduce the risk of manned aviation in an efficient, cost-effective and environmentally friendly manner” Conver added. Prior to this Restricted Category type certificate being issued, it was not possible to operate an unmanned aircraft system in the national airspace for commercial operations. Although a potential user could obtain an experimental airworthiness certificate, the certificate specifically excluded and did not authorize the use of an unmanned aircraft system for commercial operations.

“This certificate represents an aviation milestone that could not have happened without the FAA’s vision and leadership,”

Researchers and other entities now will be able to perform aerial observation at significantly lower operational costs compared to manned aircraft. Puma AE also gives personnel the ability to immediately obtain and analyze aerial monitoring data because they will be able to hand launch Puma AE whenever needed, giving them a new option to traditional methods, such as manned aircraft, support ships and satellites.

The 13-pound Puma AE unmanned aircraft system does not require any infrastructure, such as runways, launching pads, or recovery devices. It is man-portable and can be assembled in minutes, hand-launched and recovered on sea or land.

“Because Puma is a very quiet aircraft and battery operated it can monitor critical natural wildlife habitats at low altitudes without disturbing the animals or adversely affecting pristine environments,” said Roy Minson, AeroVironment senior vice president and general manager of the company’s Unmanned Aircraft Systems business segment. “Puma also is very flexible and easy to use because operators can take it anywhere without needing to haul any infrastructure, such as a launcher or recovery device, on the missions. This is especially important for oceangoing vessels, since installing new infrastructure can be a long and costly process.”

Wasp AE (designated RQ-20A) is in production for the US military and foreign customers. In January 2013 the US Army awarded Aerovironment, along with five other producers of small UAS, a $248 million contract providing a framework for future orders.