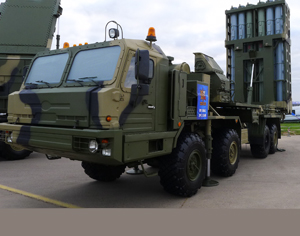 The Russian company Almaz Antey introduced today the newest air defense system from Russia, the S-350E . The new system was displayed today for the first time in public at the MAKS 2013 airshow. The photos on this page were posted by Bill Sweetman of Aviation Week. “S-350 Vityaz is a highly mobile system, smaller than the S-400, but using that system’s 9M96E2 missile” sweetman posted in the Ares blog. The system is carried in three modules – the 50K6E command post, the 50N6E radar (photo below) and the 12-round 50P6E launcher (shown above). A single command post can control two radars and up to eight launchers, and engage up to 16 aircraft or 12 missiles at a time.

The Vityaz (50R6) system developed by Almaz-Antey is expected to replace the earliest variants of the S-300 family, namely S-300PS and PMU PS-1A to be phased out of service by 2015. Early deployment of Vityraz systems could begin next year, if testing proceeds as planned. The S-350 was unveiled in June 2013 at the company’s Obukhov State Plant in St. Petersburg and. According to Almaz Antey president, Vladislav Menshikov, the new system is expected to be ready for testing in the fall of 2013.

The system boasts advanced all-aspect phased array radar, a new mobile command post and a launcher carrying 12 vertical-launch missiles, which will use a variant of the 9M96 active radar homing missile. Similar missiles are used by the S-400, the newer generation of the S-300, which is currently being deployed in Russia and offered for export.

A unique feature introduced with Vityaz launchers is the capability fire short-range missiles, in addition to the medium-long range capability of the 9M96. The shorter range missile is likely to be a variant of the 9M100. According to some analysts, the range of the new system will likely be 30-120km. According to these analysts, the system would evolve to offer air defense with some limited tactical anti-missile capabilities. Moscow aims to create a multi-layered grid to cover Russia’s airspace, defending against threats ranging from drones, to conventional manned aircraft, to cruise and ballistic missiles. Such system could employ S-500, S-400, S-300E, as well as the shorter-range Pantsir systems.

The S-350E is based partially on the design of the South Korean KM-SAM Chun Koong system which Almaz-Antey helped designed. The Russian company developed three radar units for the KM-SAM, and is also believed to have helped the Korean missile manufacturer design the MK-SAM effectors. The Russian military closely followed the Korean development and in 2007 decided to back the development of a Russian derivative that eventually evolved into the Vityraz system.

The Russian MOD plans to buy at least 30 Vityaz systems before 2020, following the completion of the developmental testing.