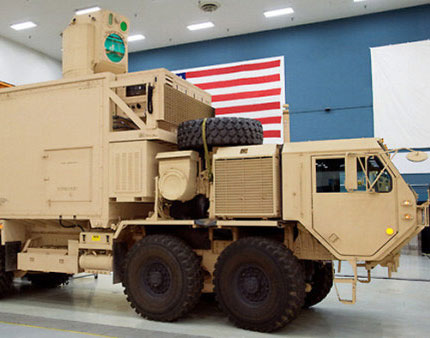 Israel’s defense electronics company RADA Electronic Industries announced last week that its Tactical Multi-Mission Hemispheric Radar (MHR) was selected by Boeing for evaluation with Boeing’s Future Directed Energy Tactical Systems. Field testing of the MHR, which was recently delivered to Boeing, will begin in the near future.

Boeing is developing a number of high energy laser weapon systems demonstrators, for use in tactical applications. Among the applications demonstrated with these technology demonstrators are counter Rocket, Mortar ad missile applications, and counter UAV uses. Some of the programs are developed under the US Army demonstration programs, others are funded privately by Boeing. Among these are the High Energy Laser Technology Demonstrator (HEL TD), funded by the U.S. Army; the Free Electron Laser and the Mk 38 Tactical Laser System, commissioned by the U.S. Navy; and the Tactical Relay Mirror System, being developed for the Air Force and the Office of the Secretary of Defense/Director of Defense Research and Engineering.

The Directed Energy Systems division of Boeing Strategic Missiles and Defense Systems is privately funding the development of an Acquisition Tracking and Pointing (ATP) System, designed to handle low-to-medium power laser systems. According to Boeing, ATP is optimized for homeland security and force protection. Supporting the currently deployed Avenger platform, the laser system can provide options for lethal and non-lethal weapons to counter both air and ground threats.

RADA’s Tactical Multi-Mission Hemispheric Radar provides volume surveillance and detection of multiple threat types, including UAVs, mortars, and rockets. The tests, to be carried out by Boeing, will evaluate the radar’s operability with the ATP system.