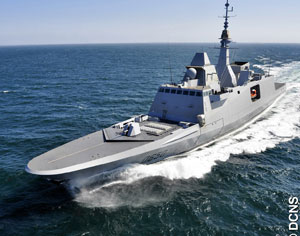 FREMM frigate Normandie, the second of the Aquitaine class for the French Navy, was put to sea for the first time on 25 October. This milestone marks the beginning of the ship’s sea trials, which will take place off Brittany and are expected to last several weeks. According to FREMM programme manager Anne Bianchi, The construction of this second-of-class FREMM frigate for the French Navy is proceeding on schedule and on budget. The FREMM multipurpose frigate (Frégate multi-mission) is a class of frigate designed by DCNS/Armaris and Fincantieri for the navies of France and Italy.

These preliminary trials will offer an opportunity for crew familiarization and testing of the ship’s propulsion and navigation systems.  The first three days will be the ‘familiarisation’ phase, enabling the crew and other personnel to evaluate the ship’s safety systems and equipment, including fire-fighting, flood control and emergency response systems and evacuation procedures as well as manoeuvrability and mooring performance.

The following tests will focus on the propulsion system. The FREMM’s high-performance hybrid CODLOG (COmbined Diesel eLectric Or Gas) power package combines a gas turbine for mechanical propulsion at speeds exceeding 27 knots and electric motors for quiet, low-speed propulsion. This phase will also include extensive testing of the ship’s navigation (log, position, heading) and other basic systems.

On completing these preliminary trials, FREMM frigate Normandie will return to DCNS’s Lorient shipyard for several weeks of quayside work. In early 2014, the ship will put to sea for a second series of trials focusing on the combat system.

The lead ship of the class, Aquitaine, was commissioned during November 2012 in the French Navy. In France the class is known as the Aquitaine-class, while in Italy they are known as the Bergamini-class. In 2007, Morocco ordered one anti-submarine variant of FREMM. The first vessel of this class, Mohammed VI will be commissioned November 23, 2013, to be followed a month later by the commissioning of the second Italian vessel of this class, Virginio Fasan. 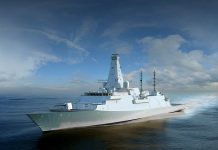 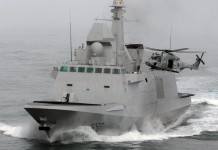 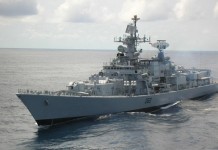