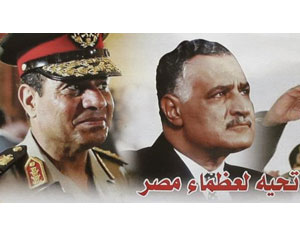 Egypt is considering spending up to $4 billion on advanced weaponry from Russia following the partial suspension of military aid and equipment deliveries from the United States. Egypt’s foreign minister Nabil Fahmy confirmed the issue of buying arms from Moscow is considered by the Government. Tuesday November 12. Such spending would require generous Russian loans, as Egypt is currently unable to invest in new arms, given the country’s desperate economic situation. Nevertheless, Egypt is still positioned as the largest, most powerful nation in the region. Winning back Egypt could offset the loss of Libya as a Russian arms buyer. As for the military regime in Egypt, a strong Russian support would help stabilize the regime, that has been under pressure from Washington, over the disputed military coup.

For Moscow, such an investment in the renewal of military ties with Egypt could signify a return in force to the Middle East while US diplomacy is failing all over the region.

Russia will supply modern weaponry to Egypt, provided that Cairo is able to finance the purchases, a high-ranking official at Russia’s state arms exporter Rosoboronexport said Friday. Novosti quoted Donia Al-Watan that published earlier today that Moscow has offered Cairo “a historic deal giving Egypt an option to buy the most advanced weaponry without any restrictions.” the Rosoboronexport official told RIA Novosti. “We are ready to negotiate with the Egyptian side the possibility of deliveries of new weaponry as well as repairing equipment supplied in Soviet times,” He said such new deliveries would depend on Egypt’s ability to pay for them. But he noted, “Moscow is ready to discuss with Cairo a possible loan to that country.” The source spoke on condition of anonymity due to the sensitive nature of the subject.

On the backdrom of the warming relations with Moscow, a Russian missile cruiser, the Varyag, has made an unofficial port call in the Egyptian city of Alexandria on the Mediterranean Sea. Varyag that arrived here for a six day visit, is part of the Russian standing task force in the Mediterranean currently comprising the Varyag missile cruiser, the Smetlivy frigate, several large amphibious landing ships, as well as two reconnaissance ships. The flagship of the task force is the nuclear-powered missile cruiser Pyotr Veliky that arrived here from the Northern Fleet area of operation.

The report comes on the eve of a visit to Egypt by a Russian military delegation led by Defense Minister Sergei Shoigu. A source in the Russian Defense Ministry told RIA Novosti on Thursday that the delegation would visit Egypt on November 13-14. The source said the Russian delegation would include the first deputy director of the Federal Service on Military-Technical Cooperation, Andrei Boitsov, and officials from state-arms exporter Rosoboronexport.

The Obama administration announced on October 9 that it had decided to “hold the delivery of certain large-scale military systems and cash assistance to the [Egyptian] government pending credible progress toward an inclusive, democratically elected civilian government through free and fair elections.” According to US officials, the suspended aid included the delivery of four F-16 fighter jets, 10 Apache helicopters, M1A1 tank kits and Harpoon anti-ship missiles.

The Soviet Union and Egypt enjoyed close ties during the 1960s and early 1970s, when the Arab country was led by Abdel Nasser. But within years after the death of Nasser, the new president Anwar Sadat started reorienting the country toward the West and expelled about 20,000 Russian military advisers stationed in Egypt in July 1972. Bilateral relations have since never warmed up to the previous friendship level.