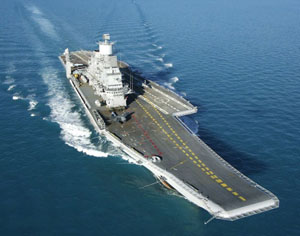 India’s Vikramaditya aircraft carrier left the Sevmash shipyard in northern Russia, embarking on a two-month voyage to its permanent base in the Karwar naval base near Goa in southwestern India. The aircraft carrier, which was handed over to the Indian navy on November 16, left Sevmash 26 November and anchored at Murmansk December 2nd to load supplies and prepare for the two month voyage home. On its way Vikramaditya will be accompanied by an Indian tanker and a frigate on the first leg of the voyage, which is expected to take about two months. Upon its arrival in India the carrier will be refitted with additional systems, including air defense missiles and electronic systems which could not be installed in Russia.

According to Sevmash, there are some 180 Russian specialists on board the warship who are tasked with monitoring the vessel’s overall performance and the on-site training of the Indian crew, as well as providing assistance in fixing any possible glitches in the operation of the ship’s systems, including air conditioning. Part of the Russian personnel will stay on the Vikramaditya after its arrival in India in order to provide maintenance services under a one-year warranty agreement, followed by a servicing contract for a period of up to 40 years, the Sevmash said.

The Indian Navy has already taken delivery of 16 MiG-29K/KUB naval fighter aircraft destined for the carrier, which were completed before their parent ship was ready for sea. The first MiG-29K squadron INAS 303 ‘Black Panthers’ commissioned at INS Hansa near Goa in May 2013 will support the Vikramaditya, to be based at the nearby Karwar naval base, on the western seaboard. A second squadron to be based at the base INS Dega near the east coast port city Visakhapatnam, where the Navy plans to set up the base of aircraft carrier INS Vikrant, expected to be inducted into the Navy by 2017. The Navy intends to operate 45 such aircraft on all new flat deck carriers.

The MiG-29K is a naval variant derived from the MiG-29. It is being operated by the Russian and Indian air forces. The “K” suffix in the MiG-29K stands for “Korabelny,” meaning ship-borne in Russian. The MiG-29K (single seater) and KUB tandem two-seat operational trainer variant have been built for carriers that are not equipped with catapults (short-takeoff-but-arrested-recovery – STOBAR). On such vessels the take-off is performed using full engine thrust, accelerating the aircraft on a short run, assisted by a “ski-jump” shaped deck. Landing is performed using conventional tail hooks and arrester wires.