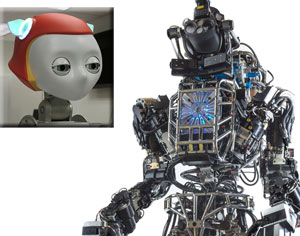 Google has revealed it has taken over eight robotics companies in the past half a year, in an effort to create a new operating unit dedicated to robotics technology. Google’s statement was released last week, following the Amazon’s announcement of its ‘Prime Air Project‘, aimed at expediting deliveries of goods using electrically powered multirototr unmanned aerial platforms but a week later it was clear that Google is after much more than UAVs.

The first seven acquisitions were small, highly specialized companies. On on Friday the internet giant confirmed that it had completed the acquisition of Boston Dynamics, a legged robotics specialist that have developed unique robotics projects for the Pentagon for years – robots the can crawl, walk, run and jump. Google said it will continue to honor the contracts Boston Dynamics has been doing for the military. Google executives said the company would honor existing military contracts, but that it did not plan to move toward becoming a military contractor on its own. Subscribe to read our commentary on the potential risks.

Apart from Boston Dynamics, Google has gathered seven companies in recent months, all are now grouped under the company’s robotics effort headed by Andy Rubin, who was previously in charge of the Android operating system. From its based in Palo Alto, California, Google’s robotics projects will run the companies located in San Francisco area and in Japan – one of the world’s leading nations in the field. According to the New York Times, the recent deal is “the clearest indication yet that Google is intent on building a new class of autonomous systems that might do anything from warehouse work to package delivery and even elder care.”

Boston Dynamics’ specialization in legged and humanoid robots will align well with the other companies Google have acquired under its robotics portfolio; among those, four are involved in different technologies related to humanoid robots, including manipulator arms, 3D vision and ‘friendly’ robotic assemblies, used for operations and control of such robots.

Founded in 1992 by Marc Raibert, a former professor at the Massachusetts Institute of Technology (MIT), Boston Dynamics was involved in numerous research programs. In recent years the company was pushing the limits of legged robotics. Among their recent successes were LS3, a legged ‘mule’ that has entered advanced testing with the Marine Corps, and ATLAS, a humanoid robot used by DARPA for the advanced phase of the DARPA Robotics Challenge (DRC). DRC is a two-year contest creating robots that can replace humans in operating in hazardous disaster areas such as the Fukushima or Chernobyl nuclear reactors.

ATLAS is a hydraulically powered robot in the form of an adult human. It is capable of a variety of natural movements, including dynamic walking, calisthenics and user-programmed behavior. Based on the Petman humanoid robot platform, Atlas was modified to meet the needs of the DARPA Robotics Challenge. Seven teams will be using an Atlas to participate in the Trials.