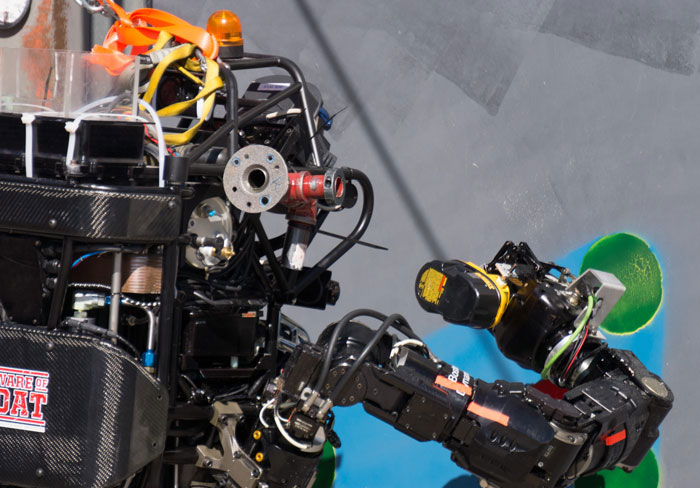 16 robotic research teams from the USA and Japan demonstrated the skills of humanoid robots developed for the DARPA Robotic Challenge (DRC) trials, which took place in Florida that On December 20-21, 2013. The teams were called to demonstrate their prototype robots’ ability to perform a number of critical real-world disaster-response skills. After two days of trials, eight of the teams qualified to receive up to $1 million in funding to continue their work.

For the DARPA Robotics Challenge (DRC) Trials, DARPA constructed an eight tasks challenge course at the Homestead Speedway in Homestead, Fla., these tasks simulated what a robot might have to do to safely enter and effectively work inside a disaster zone, while its operator would remain out of harm’s way. “The key is that these standards provide a real opportunity for robots to compare themselves to each other and measure progress.” said Adam Jacoff, robotic research engineer at the National Institute of Standards and Technology (NIST) that helped set the tasks for the trials. “The idea of the standards is to help developers, get out of the laboratory, understand what is working and what isn’t”. Successfully fulfilling each tasks would earn the robot and team a set of points which would add up to 32, if all tasks are successfully met.

“At the start of the event, I said that I would be thrilled if even one team scored half the points available,” said Gill Pratt, the DARPA program manager for the DRC, during the event’s closing ceremony. “The event exceeded my expectations multiple, multiple times over, with the top four teams each scoring half or more.

The success and reliability of the various hardware and software approaches that the teams demonstrated outside their laboratories was tremendous to see in action and sets an important baseline going forward.”

The awards ceremony capped off a second day in which spectators—including many families with children—enjoyed an atmosphere similar to a traditional sporting event, not a scientific exercise. In addition to the Trials, DARPA hosted the DRC Exposition that demonstrated first responder exercises and their technology needs.

“The DRC Trials demonstrated the difficulty of having robots conduct seemingly simple tasks in real-world situations, and the participation of the first responder community provided an important illustration of how technology can save lives,” said Brad Tousley, Director of DARPA’s Tactical Technology Office. “This event was yet another example why challenges work to attract new ideas and help quickly advance technology to solve a focused need.”

With the conclusion of the DRC Trials, DARPA and the teams are now looking ahead to the DRC Finals sometime in the next 12-18 months. The Finals will be an opportunity for the eight top teams and the other eight participating teams to continue their efforts alongside new teams to vie for the chance to win the DRC’s $2 million prize.

Pratt has already identified three initial goals for the next competition. “First, we’d like the robots to be more stable so they don’t fall, and if they do fall, be more robust so they won’t break,” he said. “Second, have the robots work without their tethers by using wireless communications and more efficient, self-contained power systems. Finally, we’d like the robots to use more task-level autonomy in unstructured environments such as those found in real disasters.”

The finals will be held again at the Homestead-Miami Speedway. The eight teams that graduated the trails will participate utilizing the DARPA funding they have won. Other teams will also be able to qualified for the finals, using independent sources of funding.